In Canada (or the US or anywhere else in the world) a police speed trap involves a police person with a radar gun hidden to the side, someone to wave the victim down and a few chase cars just in case.

Not in Tokyo. This is what it looks like; one with a wand and the other standing to the side with white gloves. Yes, white gloves.

On a personal note, this is how I got a $70 ticket for turning the wrong way on a stop sign. Seriously .. taken down by a police office on foot! Funny thing is that after being pulled over by the officer on foot, 9 additional officers showed up quickly to assist with the whole communication thing.

I am not too distraught over the ticket as the 1st time I got pulled over I played the language barrier card and after saying “No, sumimasen (apologies), no ticket, warning please, arigato (thank-you)” about 40 times over 10 minutes, multiple mystery conversations on the walkie-talkie,  I got let off by 2 very confused police officers.

Every day is an adventure.

I cannot imagine standing in a circle, holding hands and bouncing up and down to the cadence of a random teammate with people on my hockey team … ever.

This weekend we bought a car. We could not find the one that we wanted at the dealership so he called around until he found us exactly what we wanted and then introduced us to that dealership.

Now that is service. As an aside, making a car purchase using Google translate on my iPhone was surprisingly effective although I found the one phrase the dealer did know in English rather frustrating:

So much for negotiating (smile).

During our travels from dealer to dealer (car shopping is not high on my “fun” list), we happened across this dealer who restores old Minis. I don’t know who would every buy one (they look cramped), but they were refinished perfectly – spectacular looking cars. He had 30 on the showroom floor. The right car for the tight Tokyo laneways. 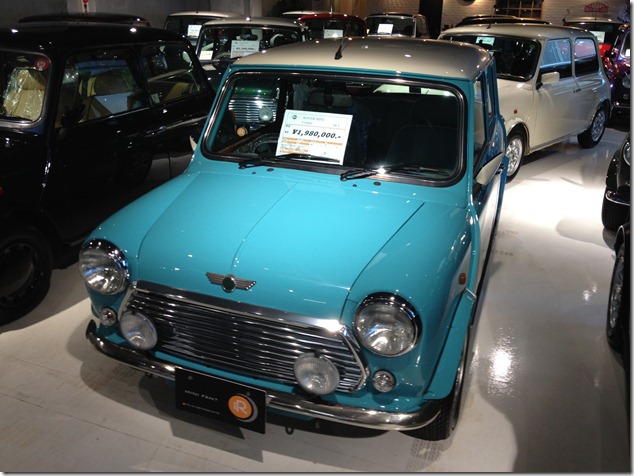 Expense Admin: “I think we are entitled to them!”

Expense Admin:  “I want the truth!”

Sales:  “ Son, we live in a world that requires revenue.  And that revenue must be brought in by people with elite skills.  Who’s going to find it?  You?  Mr. Operations?  We have a greater responsibility than you can’t possibly fathom.

You scoff at the sales division and curse our lucrative incentives.  You have that luxury.  You also have the luxury of no knowing what we know: that while cost of business results are excessive, it drives in revenue.  And my very existence, while grotesque and incomprehensible to you, drives REVENUE!!!

You don’t want to know the truth because deep down in places you don’t talk about in board meetings…you want me on that call.  You NEED me on that call!!!  We use words like stop loss, cost management, network discounts and transparency.  We use these words as the backbone of a life spent negotiating opportunities.  You use them as a punch line!!!

I have neither the time nor inclination to explain myself to people who rise and sleep under the very blanket of revenue I provide and then question the very manner in which I provide it.  I would rather you just said “thank you” and went on your way.  Otherwise I suggest you pick up a phone and make some calls.  Either way, I don’t give a damn what you think you’re entitled to!”

Like Loading...
At a dinner: “My mom used to say, kids are like pancakes. The first one never turns out”
We laughed. Those who were 2nd, 3rd or 4th children laughed hardest and vowed to tell their oldest sibling. Those of us born first laugh along … and wondered … (smile)

Like Loading...
I have stated in the past that I have done stupid things, just part of life. It is good to laugh at myself, helps to ensure I never take myself too seriously. On that note …Last week, my wife was doing a fast/natural cleanse. On Wednesday night she offered to share the fibre drink with me. I declined, but decided to participate by drinking a double dose of Metamucil. The next day, I felt great and was laughing with a buddy about cleansing. He mentioned an interesting stat, the average male has 10 lbs. of gunk stuck in the digestive track from red meat and the like. From Colon Complete 3000 (As seen on TV):

A toxic colon is a major factor in the development of food intolerance leading to chronic ill health. You cannot expect to be well if the main organ responsible for ridding the body of toxic waste is under-functioning. When the colon is irritated by diet, stress, drugs, chemicals, and other substances, it tries to protect itself by producing more mucus. This additional mucus can bind with the sludge from refined foods, such as white flour, and build up on the wall of the bowel, narrowing the lumen. This layer of gluey, hardened feces can weigh several pounds and is a good place for harmful organisms to breed.

This got me thinking … So when the fibre drink time came on Thursday night, I doubled down. Well actually, I 8X down. That is right, 8 times the recommended dosage (Note: Don’t try this at home kids).
The first clue that this was a bad idea should have been how quickly the drink became thick and undrinkable. I had to add water three times. The first warning that I had made a terrible mistake was after I gagged the drink down. I started reading the label which stated that Metamucil can expand rapidly and cause choking. Uh, OK … In the back of mind, I knew I was in trouble (my stomach was sending signals) as I went to bed. But I hoped that it would pass (no pun intended).
At 12:30AM I woke with such excruciating stomach cramps that I thought I was dying. Was it the mushroom soup and food poisoning? Was it the 24 hour Norwalk flu that my son had a week earlier? I had yet to clue into the Metamucil link. The night was not pleasant, I was in a LOT of pain.
To make it worse, I had a very important meeting at 730 the next morning with our global VP, new Canadian president, managers and and directors to announce our new boss. No call in allowed, in person only. What am I going to do? I sent an IM to my current boss explaining that I was dying, he said no problem .. You can call in for the first 15 minutes. 7:30 AM arrives, I am in my office when Narda comes in … There is someone on the phone for you (** groan **). Sure enough, the entire room has called my house. Not the type of profiling I am looking for … ‘Hi, is Michael there?’… ‘Who is this?’ (Kids fooling around in the background) … ‘It is the office. Is he there?’ .. ‘One sec’ ..(Everyone listening) ‘MICHAEL PHONE’
Around 10AM, I start to worry. It is not getting better, I am dying or giving birth (Note to women: I know, it is nothing like birth. But having never experienced it and as I have a lower tolerance to pain, it is all relative). So I call the Metamucil hotline (Yes, they have a hotline). My anxiety grows as the prompt states ‘If this is a medical emergency, please press 1’. I get (what sounds like) a kid on the phone and explain my situation. After his snickering subsides (In his defense, I was laughing about it too), he explains that while he is not a ‘medical professional’, Metamucil does have the side effect of causing gas and bloating. It is up to me to decide whether or not to go to the doctor.
** GROAN ** I decide to hang on and spent until 4:30 PM in agony, when it finally breaks.
So be warned, exceed the recommended dosage at your own peril. That being said, I feel very detoxified. I just did it the hard way.

I have always been a big believer in the power of humour. It reduces stress, boosts the immune system and without laughter, what is life? The Pentagon appears to agree. To reduce stress, they have been sending instructors to World Laughter Tour to become certified laugh instructors. Read about it here. Doctors also agree. Even the Bible agrees: “A cheerful heart makes good medicine, but a crushed spirit dries up the bones” (Proverbs 17:22)

The guiding principal: laugh for no reason. (Note: I did that the other day while walking down the sidewalk and a remarkable thing happened, the busy sidewalk cleared as people moved to get out of my way. I almost stopped laughing when they kept pointed .. it was a bit offensive).

I find that in meetings, during presentations and in 1:1 conversations, the ability to laugh or show a sense of humour (At the right time: For example, when your boss slips and dislocates his hip, that is not a good time to laugh) is a key skill. So laugh, and if you have a tough time laughing, try getting certified (no pun intended).