My transfer station is Ginza. Again, it seems like I flow against the commuters with more people getting off than getting on. Config: Canon 5D Mark III, Canon 50mm f/1.2.

As with much of Japan’s society, it is all about order. When you stand on a platform you will notice the little colored markers where the doors will stop and people calmly and neatly line up on either side, waiting.

As people funnel on, there is no pushing or shoving – even as it gets tight. 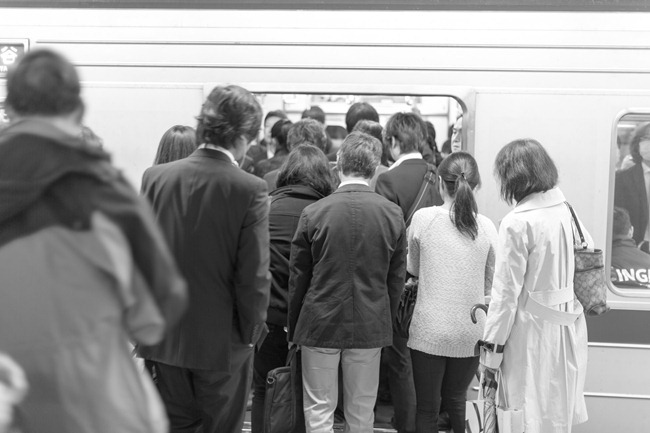 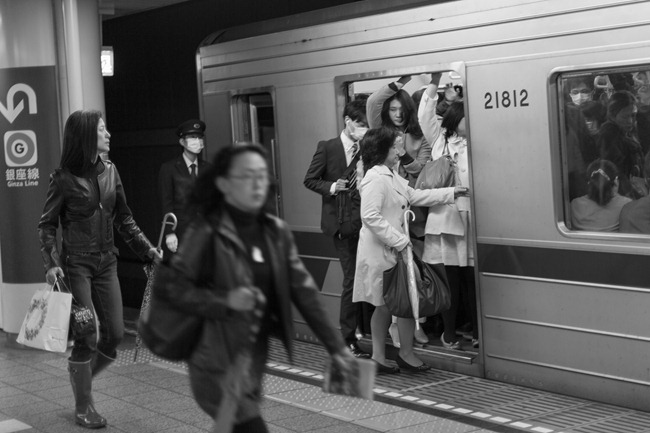 And it definitely gets tight. Although on this day, the conductor did not need to do one of those famous ‘pushes’.

A few more shots around the subway. 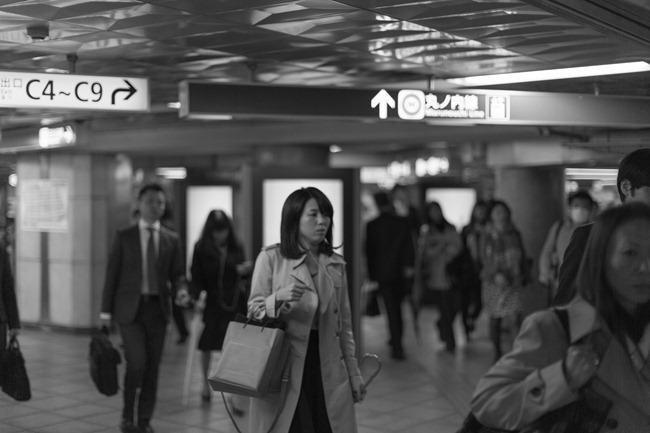 The subways of Japan, the cleanest and most efficient in the world.

A few more shots of the side streets of Hong Kong. A delicacy from one of the street markets.

Flowers are everywhere and inexpensive. That is $17 Canadian ….

This sign made me laugh. Was it a rough Grand Opening or a sign that is long overdue to come down?

An important feature at this boarding house.

Need to get there for a “tourist” weekend.

I was asked what HK is like the other day. I am far from an expert on the city as my travel there involves the usual; airport > hotel > office > meetings > hotel > airport. I did, however, take my camera and wander around one lunch time that I had free.

My opinion, Hong Kong is a city of poles. Multi-billion dollar, ultra modern buildings with extremely old buildings and farmers markets squeezed in-between. It is interesting to see.

Magazine stands are quite popular.

Durian anyone? I can always smell it in a market.

A Hong Kong scaffolding truck. They will build a 50 story building with bamboo scaffolding. 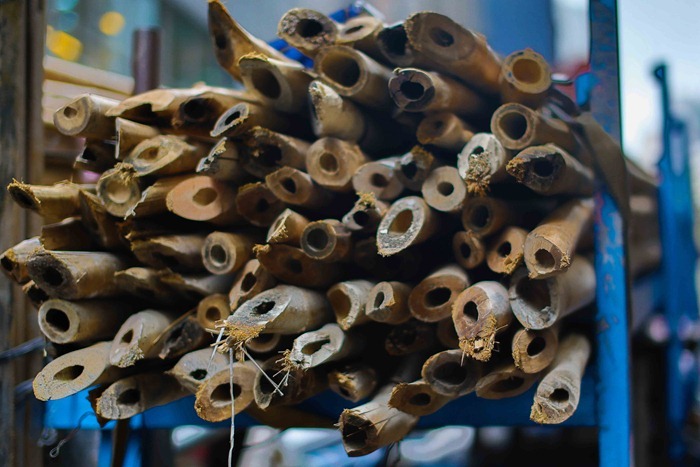 A uniquely Tokyo experience. Lights, aquariums and of course, a bar. Config: Canon 5D Mark III, Canon 50mm f/1.2. Too bad I didn’t realize that I had forgotten that I had manually set the ISO to 100 the previous day … I was wondering why I struggled for the first 20 minutes?

Fushimi Inari is one of the more famous Kyoto temples, known for one prominent feature – 10,000 Tori gates.

Fushimi Inari Taisha (伏見稲荷大社?) is the head shrine of Inari, located in Fushimi-ku, Kyoto, Japan. The shrine sits at the base of a mountain also named Inari which is 233 metres above sea level, and includes trails up the mountain to many smaller shrines.

Since early Japan Inari was seen as the patron of business, and merchants and manufacturers have traditionally worshipped Inari. Each of thetorii at Fushimi Inari Taisha is donated by a Japanese business. First and foremost, though, Inari is the god of rice.

An amazing temple, on the mountain. 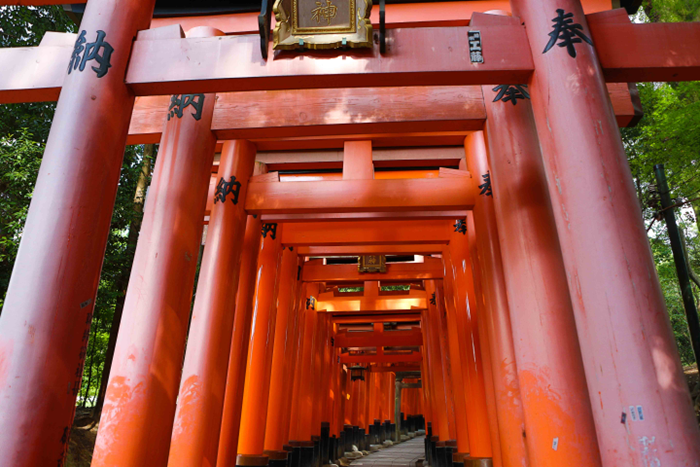 More on the gates in a moment. It could also be known for some very cool fox statues and probably the most orange paint in one area.

The gate to the temple.

A side temple with more 1,000 origami crane offerings than you can count. The sheer quantity of time invested in those cranes is mindboggling. There were a lot of them ….

As mentioned above, the temple is a popular place for business people to come and seek good fortune. What most people probably don’t notice is this sign, which lists the prices. Yen is simple to translate .. simply drop 2 zeros to get an approximate USD price. A 5 foot Tori gate is $1,750 and a 10 footer is $13,020. Seems reasonable.

The temple inscribes your name/business and address into the Tori. It lasts for about 20 years at which time they call you and you have the option to buy a new one or have it removed (the foundations rot).

The path winds up the mountain. We didn’t have time to hike it. Perhaps next time. It is about 2 hours round-trip. The path to the top …. 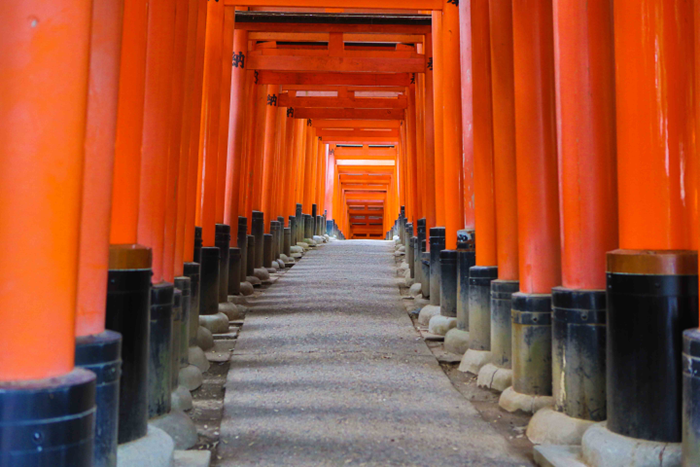 And one of my favourite shots. 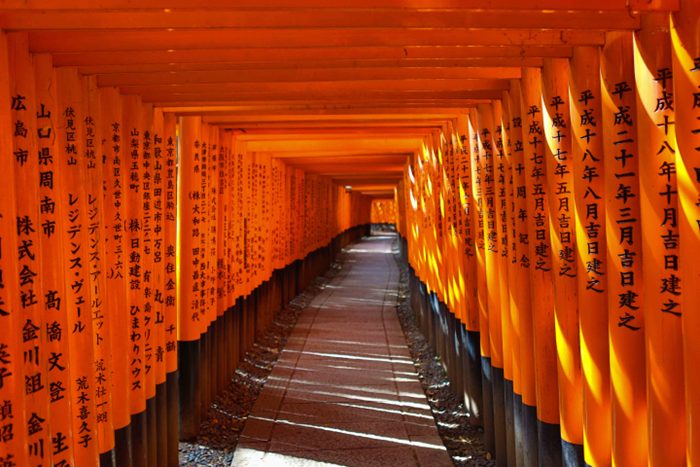 I was down there for a few hours a few weeks ago. In passing, I took a few shots. Really need to organize a holiday there.

A racing vessel I would like to ride in/on.

A boat I would not like to ride on. Seen too many “lost at sea fisherman” movies. 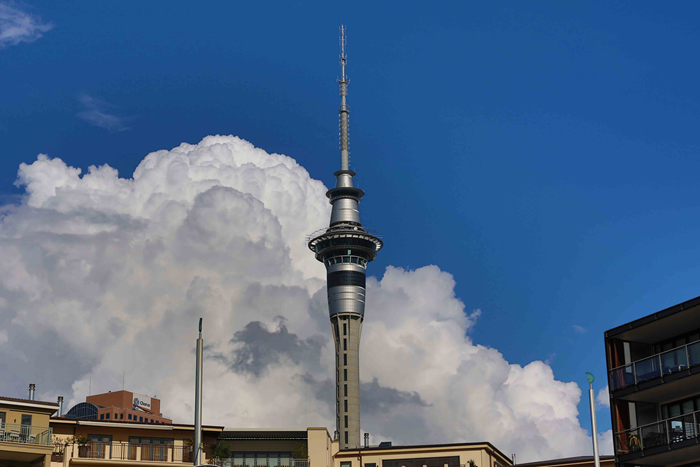 A Chinese ship that caught my eye, and the eye’s of the local newspapers. Spy ship? 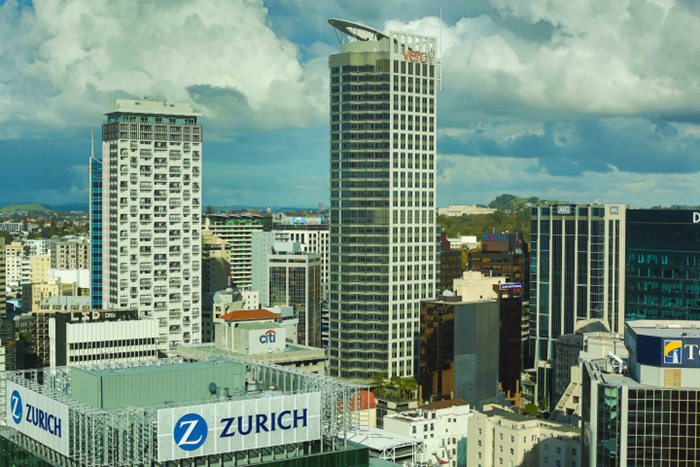 Need to get there for longer than 24 hours ….

How would you like to be the poor unfortunate souls living next to this monstrosity with it’s medieval flair?

Called a “love hotel” these feeders of the unseemly Japanese underbelly are quite common.

A love hotel is a type of short-stay hotel found around the world operated primarily for the purpose of allowing couples privacy for sexual activities. The name originates from “Hotel Love” in Osaka which was built in 1968 and had a rotating sign.

This one is for the more “adventurous”. We were walking past it on a tour and I could not help but notice the nice grandmotherly woman on the other side of the street standing in her door.

How would you like to look at this every day? (it is in quite a nice neighbourhood). Supposedly there is a movement afoot to eject them.

Is the name some form of play on words?

Last shot. I wondered, is the new BMW a client or the owner? 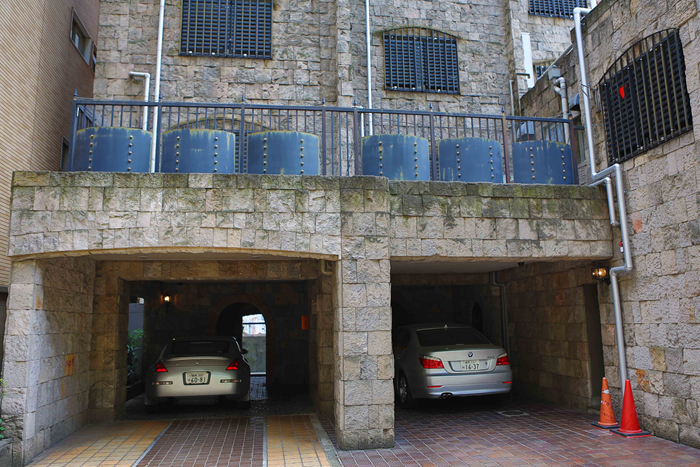 We are moving offices in a few months. The great view of Mt. Fuji will be replaced by a different view.

The rest of the view. At the bottom is a huge cemetery. I need to get there.

If you look into the background, you will notice that Tokyo is ringed by mountains. 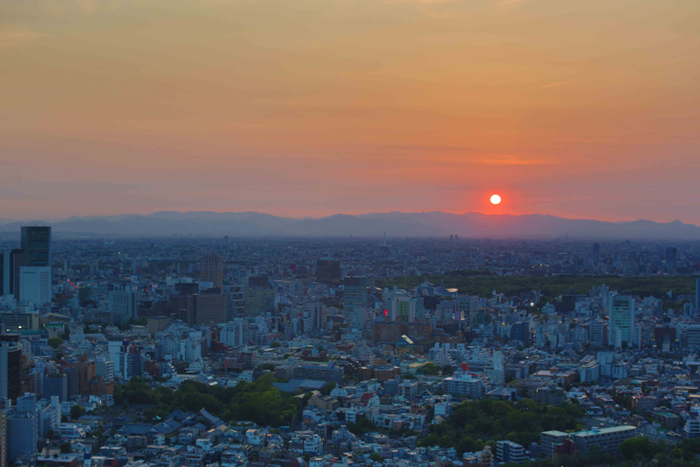 I will miss the sunsets ……

Tokyo is a place of umbrellas. If not for the rain (it is pseudo-tropical), for the sun; in which case they call them parasols and charge a lot more money.

Awhile back we were stuck in a rainstorm in Shibuya. I did not have my camera with me and have vowed that one day, I will get back to a very specific alley to get a shot in the rain as it was an amazing site.

That being said, a few shots in a similar vein, from the same area but on the wrong street (smile).

The trees have an interesting texture in black and white.

At a crossing. Not “the” crossing. But one of them.

And one oddity. I don’t know if I would buy from this shop. I found the name a bit creepy.

The other day I wanted to see something different, so I walked a different way home. The best sight was this wall, covered in flowers; Canon 5D Mark III with 50mm f/1.2 in hand. 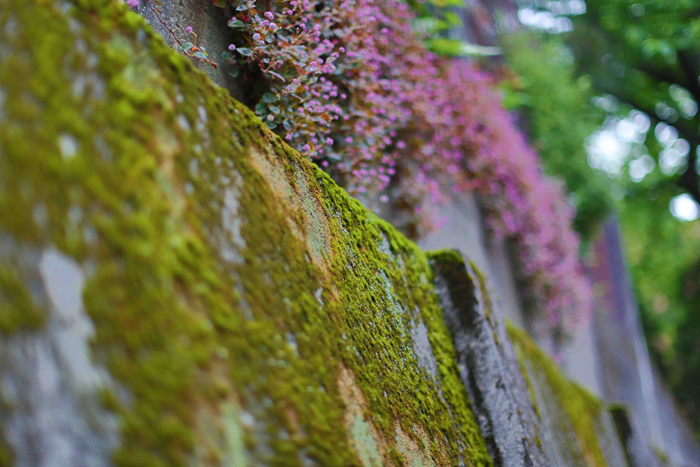 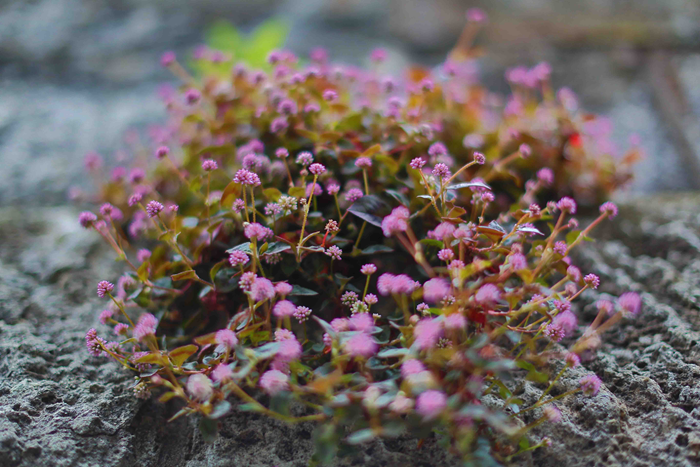 I made a quick stop to pick up some sparkling sake at this shop. I have become a big fan of sparkling sake over the last couple weeks. It is a very light summer drink and perfect for sitting out on a deck or in a backyard with a low alcohol content (5%ish).

Reminds me of the wonderful sparkling cider that we happened across in Normandy.

To get to the cider I had to walk down this stairwell which was a case of the “old” and the “new”. On one side was a gleaming metal wall (protecting a construction site), on the other an old wall with a very old stone stairwell. It wasn’t until afterwards that I noticed the mirror at the top … in case you were walking around the corner too fast (smile).

One more old and new. 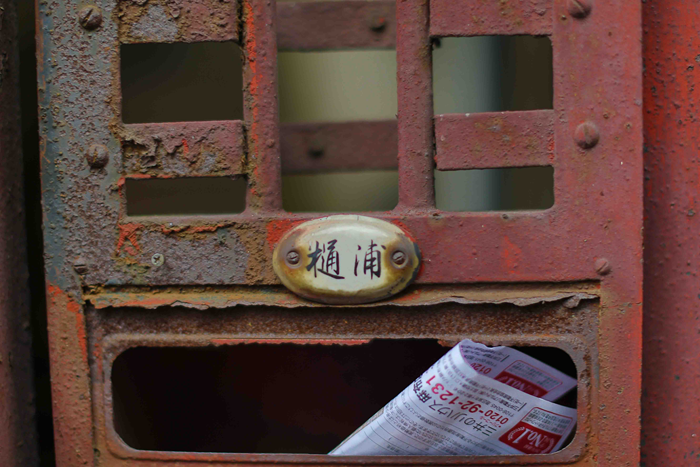 An interesting stroll. Need to do that more often.

Thanks for dropping by.

The sun is here. 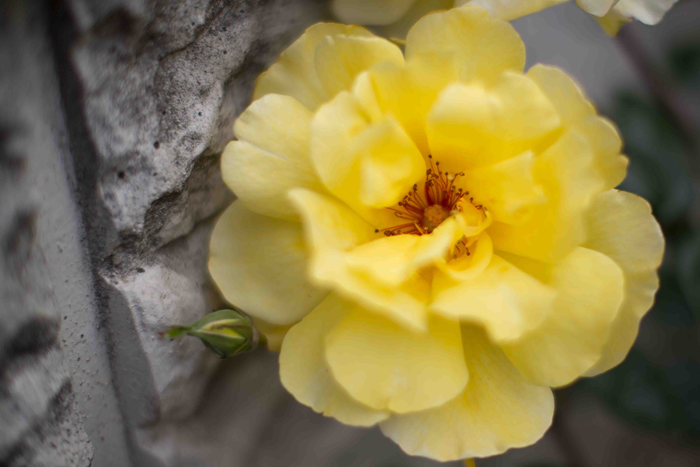 On a different tangent, they have the oddest names for hair salons in Tokyo. I have yet to figure out how these two words relate to cutting hair (smile).

Once the cherry and plum blossoms are gone, the Japanese cities explode with Azaleas. They are everywhere. 5 shots from around town via my Canon 5D Mark III and Canon 50mm f/1.2.

High on an embassy wall. 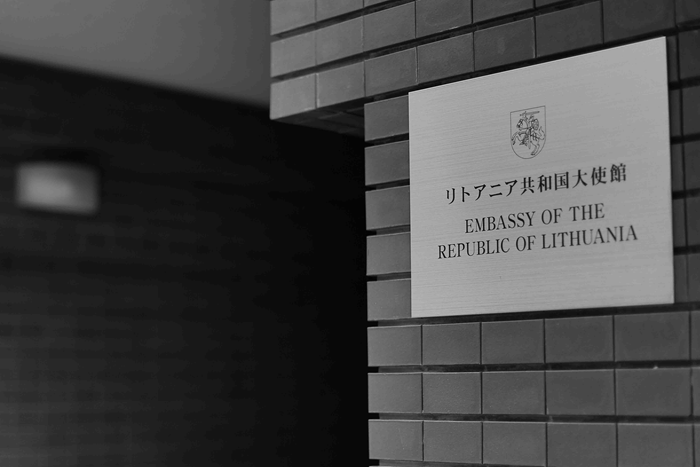