To a small temple in Hiroo.

A small temple, tucked off the road in Chofu, Tokyo, Japan. As seen by one of the many mirrors on the road. The mirrors are in place as the buildings are so close to the roads that it is almost impossible to see around corners. 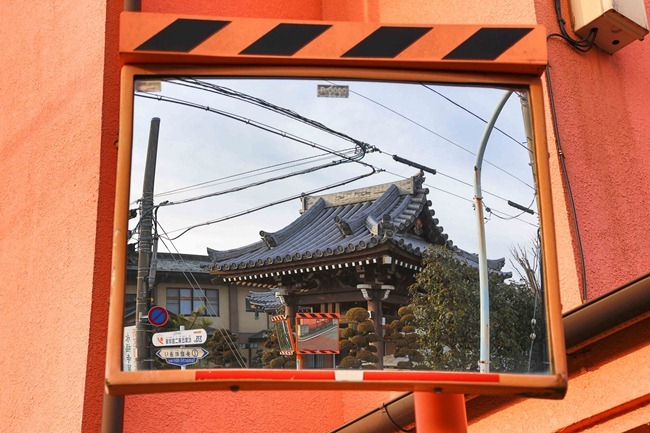 No one was around .. just a pair of boots.

The temple was across from the tracks. Everything in Japan (and Tokyo) is so tightly packed in and usually close to some type of train track.

Being Canadian, seeing lemon trees like this in January when it is 6C is a bit baffling.

Near the temple was a workshop of some type. Odd seeing what appears to be a machine shop in the middle of what feels like a residential area. 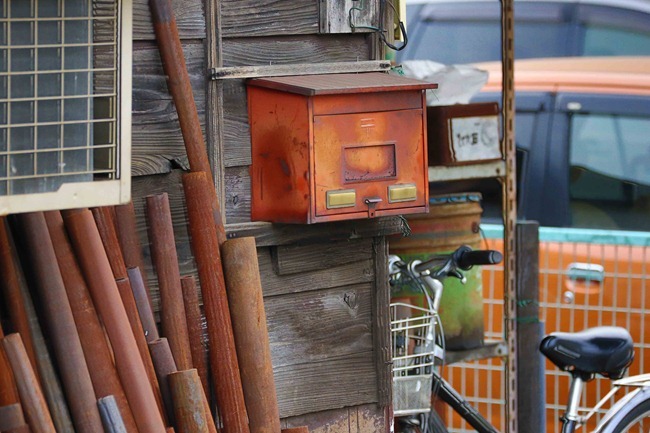 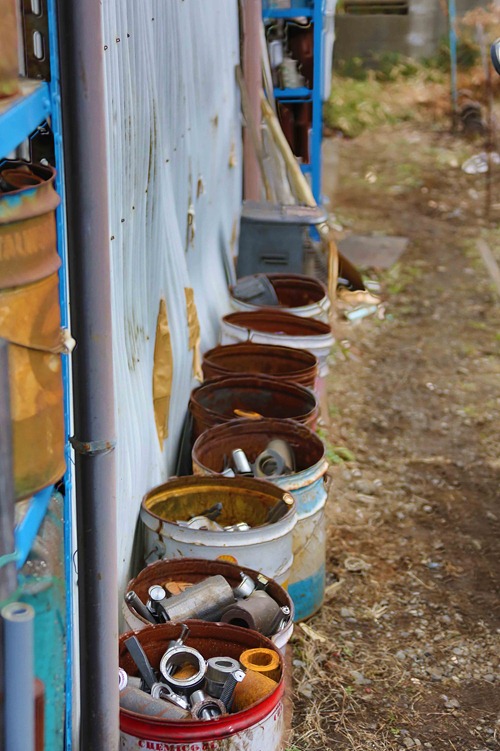 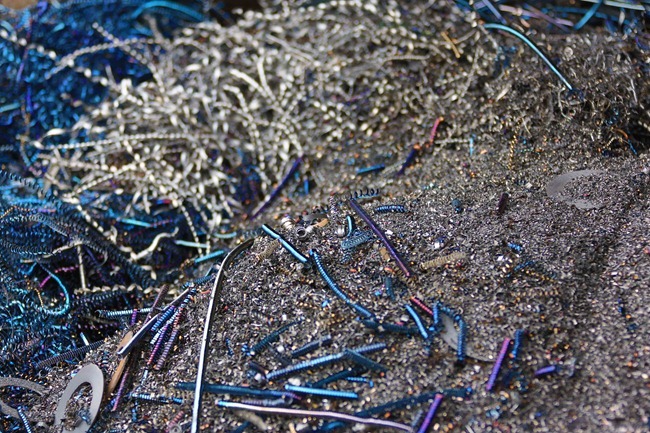 As always, Tokyo is filled with random English.

Many of Cambodia’s temples are overgrown, they say there are an unknown number hidden away – engulfed by nature. Ta Prohm is marked as one of the 3 temples you need to see because of the way that nature sprouts from the temple – that tree must have been 30 meters high (or higher) – a new roof for an ancient temple. 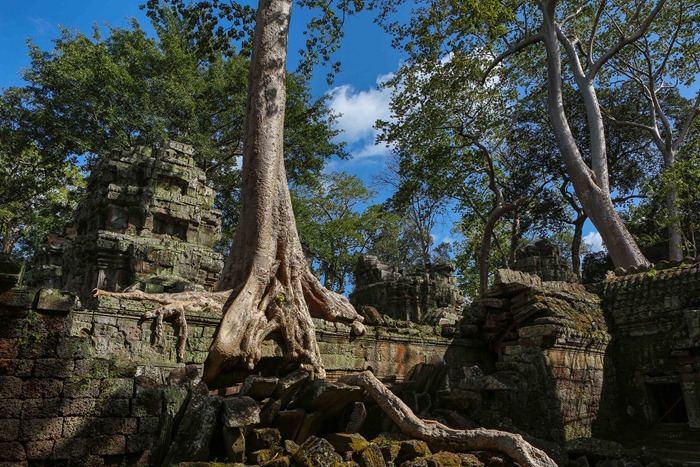 The trees have taken root everywhere over hundreds of years.

Made famous by the movie Tomb Raider (have not seen it), Ta Prohm is in the middle of restoration, in this case thanks to India.

This picture shows an example of the before (the jumble of rocks) and the after (on the right above the scaffold). Like a giant jigsaw puzzle.

A few more shots of a very beautiful and exotic temple.

A beautiful place. Of the 3 must see temples in Siem Reap, this was our favorite (yes, more than Angkor Wat). There is something mystical about the jungle intertwined through the temple.

Koshin is described as a folk faith in Japan with Taoist origins:

The main Kōshin belief that survived from an original complex faith, is the concept that three worms, called Sanshi (三尸), live in everyone’s body. The Sanshi keep track of the good deeds and particularly the bad deeds of the person they inhabit. On the night called Kōshin-Machi (which happens each 60 days), while the person sleeps, the Sanshis leave the body and go to Ten-Tei(天帝), the Heavenly god, to report about the deeds of that person.

Ten-Tei will then decide to punish bad people, making them ill, shortening their lifetime and in extreme cases putting an end to their lives. Believers of Kōshin will try to live a life without bad deeds, but those who have reason to fear will try to stay awake during Kōshin nights, as the only way to prevent the Sanshi from leaving the body and reporting to Ten-Tei.

Which (of course) lead to festivals every 60 days where people attempted to stay up for the entire day to stop the worms from leaving their bodies.

Below is a very old, traditional Koshin shrine near our home.

This faith is also affiliated with the 3 monkeys (seen in the middle bottom):

Three monkeys covering eyes, mouth and ears with their hands are the best known symbols of Kōshin faith. They are Mizaru (not see), Iwazaru (not say) and Kikazaru (not hear). It is not very clear why the three monkeys became part of Kōshin belief, but is assumed that it is because like the monkeys, the Sanshis and Ten-Tei are not to see, hear, or tell the bad deeds of a person.

Statues of Shōmen-Kongō with the three monkeys have existed in temples and shrines since the Edo era. Sometimes carved stones called Kōshin-tō were placed around a dwelling for protection. Such stones can present diverse forms, from having only Chinese characters (kanji) to including a depiction of Shōmen- Kongō with one, two or three monkeys.

So many layers to Japan’s complex history, hidden from the Gaijin.

As we drove through the countryside of Bali we watched the people preparing for the Hindu festival of Galungan. Our driver explained that this festival is as important to the Hindu’s as Christmas is to Christians.

Galungan marks the beginning of the most important recurring religious ceremonies. The spirits of deceased relatives who have died and been cremated return to visit their former homes, and the current inhabitants have a responsibility to be hospitable through prayers and offerings. The most obvious sign of the celebrations are the penjor – bamboo poles weighed down by offerings suspended at the end. These can be seen by the side of roads. A number of days around the Kuningan day itself have special names, with particular activities being organized.[2]

Driving through Bali is very different than in South/Central America. It seems like every meter along the road was filled with homes, villages and shops; all preparing for the big festival.

All along the roads were these ornate decorations, lining the way while hundreds of people laboured in front of their homes to make them. 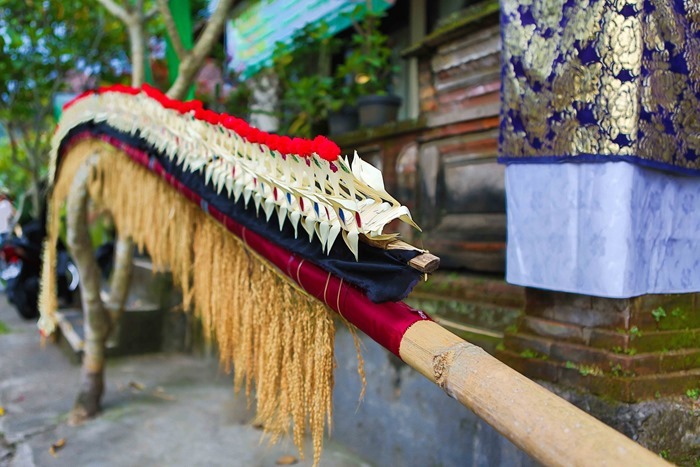 This temple was across from the coffee plantation. 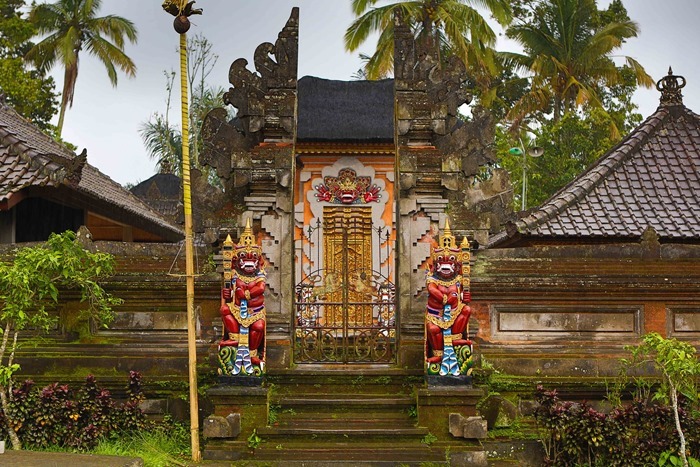 When I looked at this temple I thought “wow, it must be a special place”. But my perception was wrong, it was no more special than thousands of other Hindu temples that are scattered everywhere.

The Balinese take their temples seriously, spending copious amounts on building temples everywhere; on roads, attached to villages, in the centre of villages, randomly located in a remote jungle location or in their homes, as the quality of the temple in your home is a statement of wealth.

This spectacular and ornate temple was no different than the others.

And it was unlocked, welcoming any visitors. Too bad it was raining or I would have gone in. 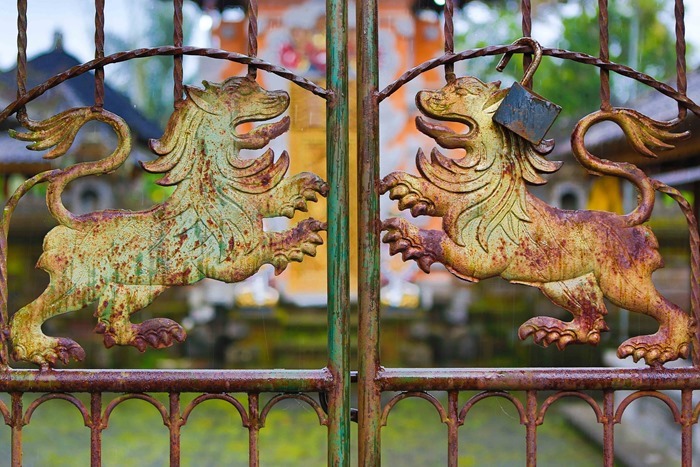