I walk past the Chinese embassy on the way to to work and it is always guarded by 4 or 5 permanently stationed police officers.

The other day I had to run to a meeting and was walking by just as a protest began. It made me smile, as it was “very Japanese”. Here were the steps in the protest:

1. Protesters lined up in an orderly manner with a number of police officers beside them on a side street so they would not disrupt traffic. One police officer had a flag. To be that well organized, they must have called ahead as there were police everywhere.

2. At the appointed moment the “protesters” march in single file to an appointed spot.

3. Protesters unfurl their banner, with one of the ends dropping and a police officer rushing to help the protester and get the banner properly displayed. 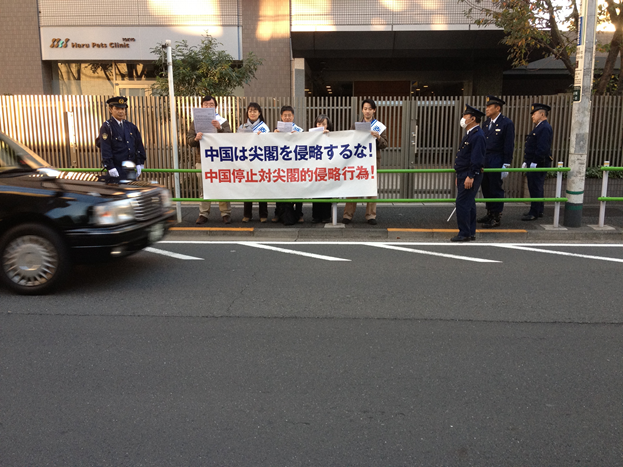 4. Protesters line up behind the fence and banner with lead protester reading out some statements and stopping for the other protestors to raise their fists in unison and yell something. Repeat.

I wish I would have had my camera … and count the police to protestor ratio (smile). There were another 10 police officers on the other side of the street.

While I was in Barcelona I had the opportunity to experience my first ‘protest’. I was standing with a man from Columbia and he observed that the protest was around government cuts to education (They were University students – facing bleak prospect in a country with 24% unemployment and 40-50% unemployment if you are under 25 (depending on which news outlet you read)).

The fellow from Columbia was amazed that the students kept away from police saying “Look at the way they do not approach the police”. I commented that it isn’t that odd. He stated that isn’t the case in Columbia – in his country the police fear the people, not the other way around.