While I was in Barcelona I had the opportunity to experience my first ‘protest’. I was standing with a man from Columbia and he observed that the protest was around government cuts to education (They were University students – facing bleak prospect in a country with 24% unemployment and 40-50% unemployment if you are under 25 (depending on which news outlet you read)).

The fellow from Columbia was amazed that the students kept away from police saying “Look at the way they do not approach the police”. I commented that it isn’t that odd. He stated that isn’t the case in Columbia – in his country the police fear the people, not the other way around.

I have been an absent blogger over the past month, in big part due to travel. I am at World Mobile Congress this week. It is my 6th time in Barcelona and as always, it is a very interesting show.

1. It is the first time I have had to take a passport to the gym. Plus, Spaniards look at you funny if you walk the street in gym clothes in February (they don’t know I am Canadian).
2. If you are pitching a partner on your products and the merits of working together closely, the person on your team at the front of the screen should not be doing email on his laptop. We were all looking at him …..
3. Even the most mundane of Spanish buildings are prettier and have more character than 90 percent of our buildings. Just your run of the mill store fronts …..

Inside the Museu Nacional d’Art de Catalunya are a range of pieces dating back to the 1300’s. As I travelled through the galleries it became clear that early Spanish art was heavily influenced by the Christian religion in the same way that Italian museums are gallery after gallery of saints, church officials and Christian scenes. Of the religious works, two stood out for me. The first being this piece titled ‘Crist cami del Golgota’.

It wasn’t the overall picture that caught my eye but this specific image. I found it haunting.

The next is one that I cannot find on the web but simply found very odd. Titled ‘Nen Jesus triomfant’, a sculpture of a baby Jesus standing on a skull by Lluis Bonifas I Masson. I could find very little on the artist and nothing on the piece. Art is about the viewer interpreting the piece, but I would love to ask what he was thinking. I found it quite disturbing, I could see a dead serpent but a human skull?

One other piece that struck me odd was ‘Nina Cosint’. Is it just me or is poor Nina to be forever remembered as the girl with the gigantic man hands?

In the last gallery we came across more contemporary but, as one of the few English plaques stated, ‘not that unique’ pieces geared towards pleasing the general audience of the time. Personally, I found many rich in color and spectacular. Below are a few photos that I will use as desktop backgrounds.

The first from 1805, ‘Gerro amb flors’. A camera fails to capture how rich this painting is.

A gallery was filled with these landscapes, each with striking deep colors and a style that was clearly ‘de rigueur’ during the late 1800’s in Spain. Perhaps I am just a sucker for a striking sky. 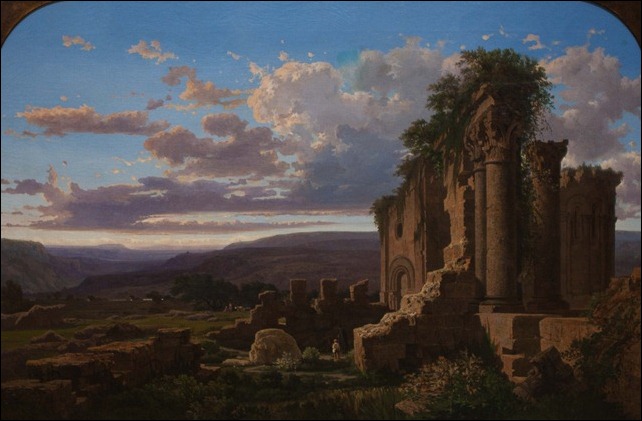 The gallery also contained the famous 15m long canvas depicting The battle of Tetuan from the Spanish-Moroccan war. The scale of the piece was impressive.

The last notable was a small coin section tucked away at the top of the gallery. Moving from 200BC to contemporary times, it documents the evolution of coins and forgery. These were from the BC era.

A nice way to spend a few hours.

I had zero time to tour Barcelona as it was a very busy week, other than an hour in the art museum at the top of the hill on the last day as the event closed. It was raining (again) and overcast. In the distance you could see La Sagrada Familia. I wonder how much it has changed? 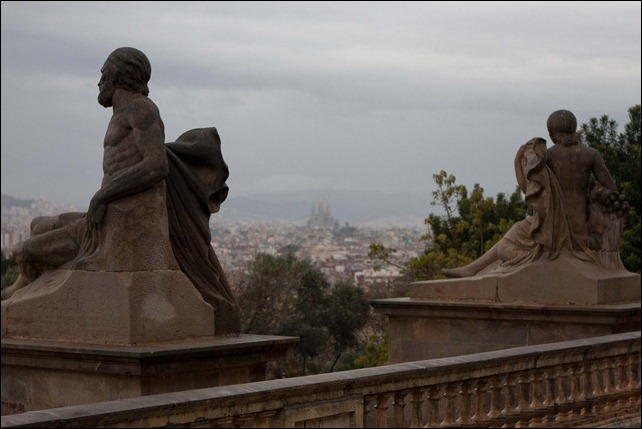 From the conference grounds, the Museu Nacional d’Art de Catalunya keeps watch .. a beautiful building. What I didn’t realize (until now) is that it is home to several other museums.

The Palau Nacional, the emblematic building of the 1929 International Exhibition, is the home of the Museu Nacional d’Art de Catalunya. It is situated on the mountain of Montjuïc, a privileged site from where you can enjoy a magnificent and unique view of the city of Barcelona.

The Palau Nacional is situated in a unique setting: Montjuïc, the mountain of museums, leisure and sport, well on the way to becoming an area of culture and life. The institutions you will find spread around the Park, of renowned international prestige, make Montjuïc the museum centre par excellence in Barcelona, with a diverse, complete offer. As well as the Museu Nacional d’Art de Catalunya, you can visit the Fundació Joan Miró, the Museu d’Arqueologia de Catalunya, the Museu Etnològic and CaixaForum, among others. 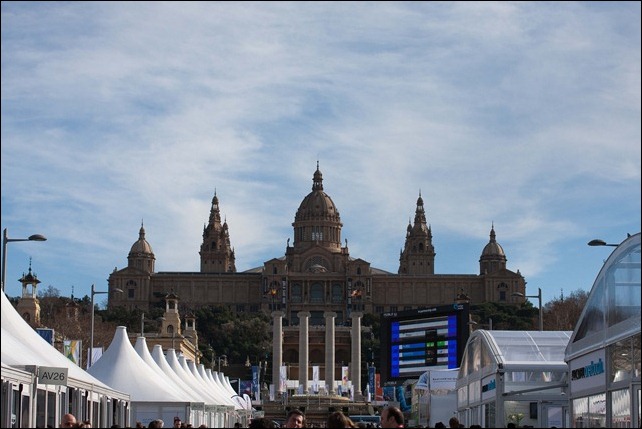 The ballroom is spectacular. 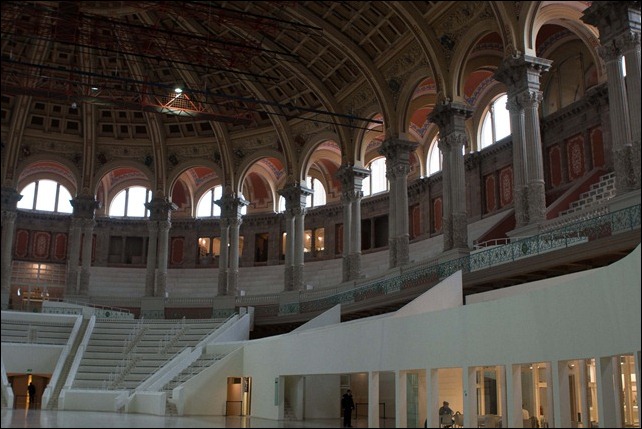 And the domes (which you can see from outside) are breathtaking. We just don’t have these types of buildings in Canada.

It is such a beautiful city with beautiful sunsets. 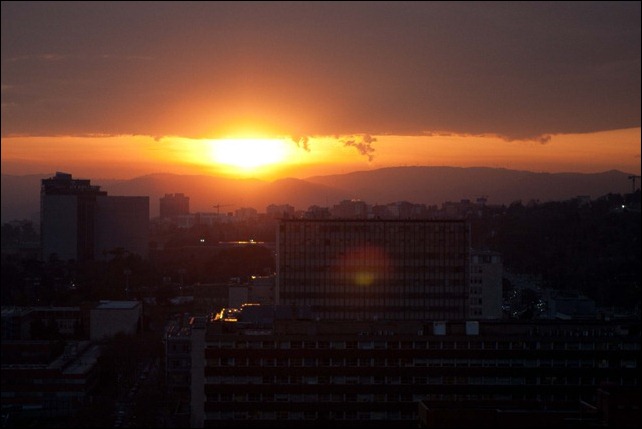 As we left WMC each evening, the Placa d’Espanya was particularly beautiful. 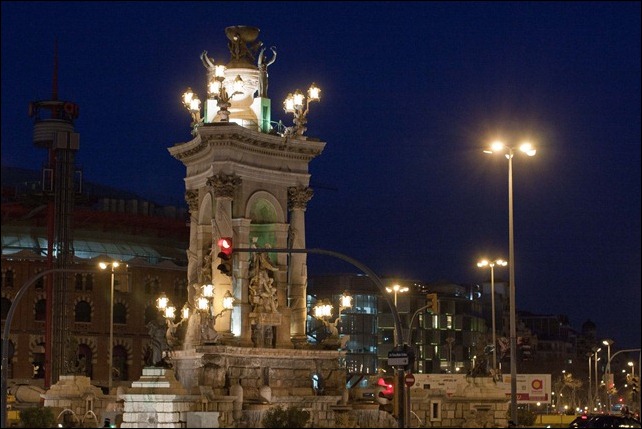 I took this photo freehand with my new 50MM. The moon peeking through a cloudy evening .. although I will take rain in February over snow any day. 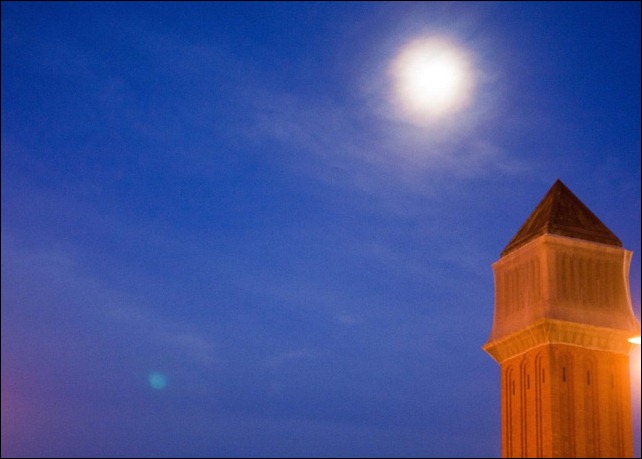 After lunch we hit the Museu Picasso (no pictures allowed) dedicated to Pablo Picasso’s personal art collection and life. One half of the museum covers works that he collected through friendships with artists of the time and through his travels. It is an extensive collection with works from Matisse, Renoir and a host of unknown artists who were clearly his friends and colleagues.

The other half of the museum is dedicated to his life, tracing his early days, through the various periods (blue period, rose period) culminating in the works that made him famous – cubism and surrealism. Personally, I enjoyed his early works much more than his late works. But in the end, you left with a feeling that he lived a very rich life and there is no doubting his talent.

Unfortunately, the first gondola was closed for repair so we forced to bus up the hill to the top. The views of the city were spectacular and the boys loved climbing over the World War II era harbor guns.

The ride down the mountain afforded a great view of the city. I found the contrast between the old world architecture and the 1970’s style – square – brick and concrete – featureless building interesting and in stark contrast to my experience in England. While people in the UK complain about the planning councils, it seems that one impact is that ‘the old’ is more prevalent than in Barcelona. 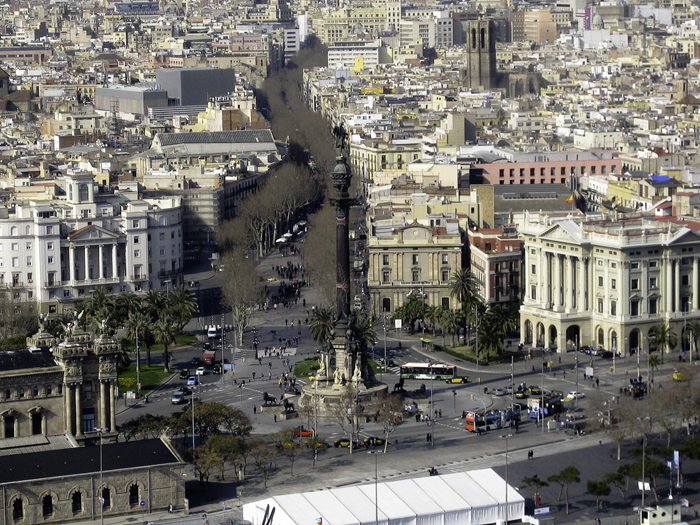 The craziest thing was the ocean. Sure, it was 65 degrees out and sunny but when the wind kicked up on the beach, it was cold. But not cold enough to stop these guys. Yes, they are kite surfing and wave surfing. It must have been REALLY cold.

As we walked back to the hotel we came across this architectural anomaly. Whale? Fish? Bird? Big copper thing that is supposed to make the office building look different than other office buildings? Government funded boondoggle? Probably. 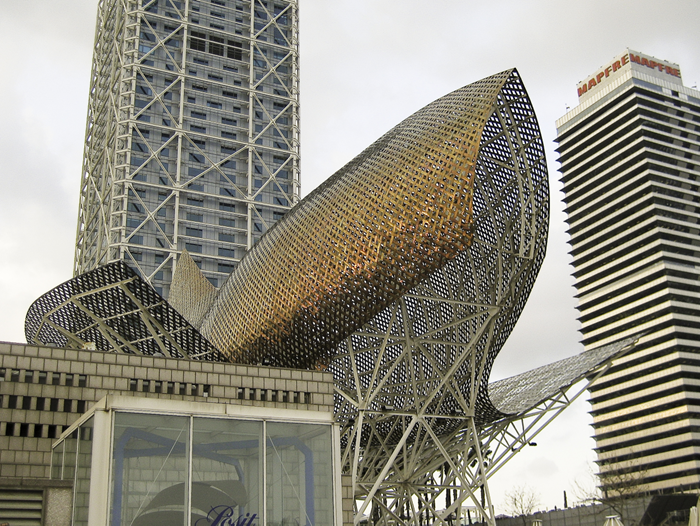 In the short time we were there, we saw quite a bit – but there is more and as I mentioned, it is a perfect ‘couples’ city. The adventure continues.