We finished out the tourist part of our Egypt trip with visits to the temples in Luxor, specifically the Temple of Karnak.  For probably the 50th time in 4 days, I was struck by the magnitude of what was standing in front of me. Columns that must have been 100 feet high, intricately sculpted and adorned.

The key difference between Karnak and most of the other temples and sites in Egypt is the length of time over which it was developed and used. Construction work began in the 16th century BC. Approximately thirty pharaohs contributed to the buildings, enabling it to reach a size, complexity, and diversity not seen elsewhere. Few of the individual features of Karnak are unique, but the size and number of features are overwhelming. Construction of temples started in the Middle Kingdom and continued through to Ptolemaic times.

A few pictures. The temple entrance. 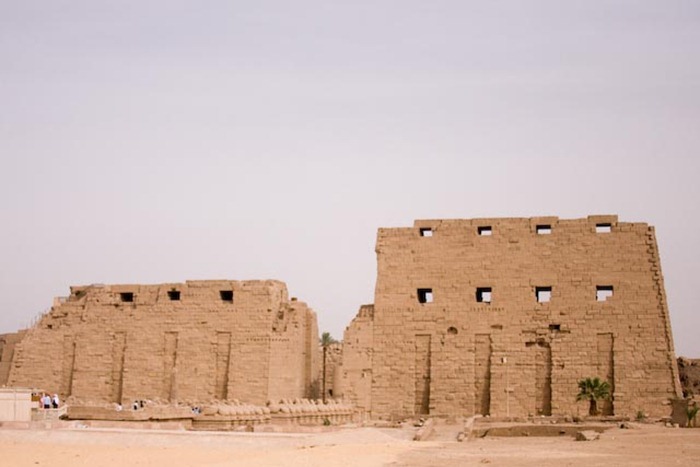 At one point more than 3000 sphinxes lined the way to the temple. 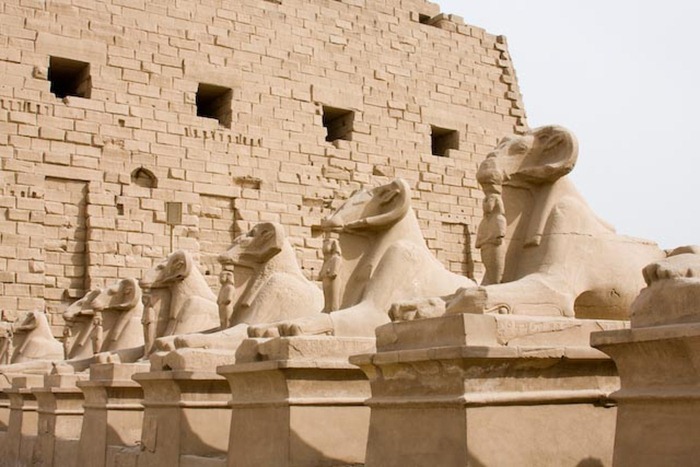 It was a very hazy day – but this picture gives you a good idea of the SIZE of the columns and the temple.

Everywhere you go, the stone is inscribed with the symbols of the time and the cartouches of dead Pharaohs. 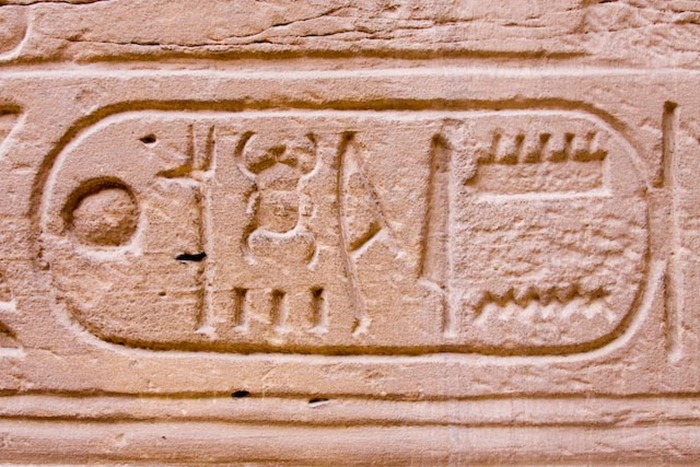 If you view the columns in the right picture you will notice that the markings are wiped away at a certain point. The guide explained that a French archeologist thought it would be smart to wash away the silt within the temple and therefore had a portion of the Nile redirected to the temple to ‘give it a good clean’. This may be an urban myth (cannot find reference of it on the web) as the more likely explanation is that the damage is simply from Nile flooding.

This wall amazed me, it was incredibly high and marked all the way up. What was so interesting is that the inscriptions had survived.

This shows what is left of the 2nd floor! I could not believe it when I saw it – you put up these monster columns and then decide, why not put on a 2nd floor?

The bottoms of the beams that cross the columns give a hint of the colour that would have adorned the temple a long time ago. 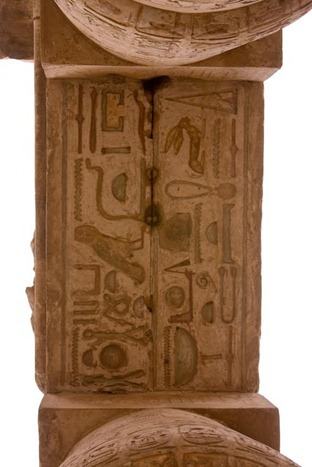 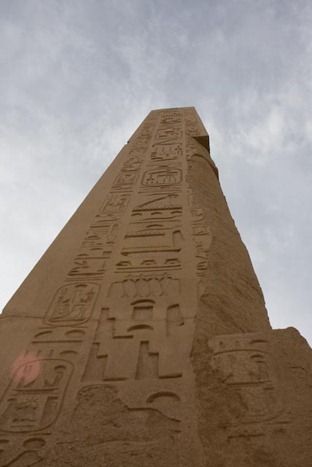 This is the point where my son took an interest in my camera and decided that he would like to take a few shots. He then started asking very pointed questions – How much does it cost? If I were to put together my birthday and Christmas could I have one? When you upgrade, would I be able to have one? Uh huh.

Now this is pretty cool. The guide showed us a wall that they figure was used for teaching. It is their version of math. Look at the below – the upside down U represents 10. Go down the left column – and add to the bottom where the sum sits.

There is a fascinating piece of work in a side temple. If you look closely you will see that the outline of the person in the middle is removed – that is Hatshepsut, one of the few women who ruled as Pharaoh and was recognized as one of the most successful Pharaohs:

In comparison with other female pharaohs, her reign was long and prosperous. She was successful in warfare early in her reign, but is generally considered to be a pharaoh who inaugurated a long peaceful era. She re-established trading relationships lost during a foreign occupation and brought great wealth to Egypt. That wealth enabled Hatshepsut to initiate building projects that raised the calibre of Ancient Egyptian architecture to a standard, comparable to classical architecture, that would not be rivaled by any other culture for a thousand years.

The defacing is very interesting:

Toward the end of the reign of Thutmose III, an attempt was made to remove Hatshepsut from certain historical and pharaonic records. This elimination was carried out in the most literal way possible. Her cartouches and images were chiselled off the stone walls—leaving very obvious Hatshepsut-shaped gaps in the artwork—and she was excluded from the official history that was rewritten without acknowledgment of any form of co-regency during the period between Thutmose II to Thutmose III.[citation needed]

At the Deir el-Bahritemple, Hatshepsut’s numerous statues were torn down and in many cases, smashed or disfigured before being buried in a pit. At Karnak there even was an attempt to wall up her obelisks. While it is clear that much of this rewriting of Hatshepsut’s history occurred only during the close of Thutmose III’s reign, it is not clear why it happened, other than the typical pattern of self-promotion that existed among the pharaohs and their administrators, or perhaps saving money by not building new monuments for the burial of Thutmose III and instead, using the grand structures built by Hatshepsut.

Amenhotep II, who became a co-regent of Thutmose III before his death, however, would have had a motive because his position in the royal lineage was not so strong. He is suspected by some as being the defacer during the end of the reign of a very old pharaoh. He is documented, further, as having usurped many of Hatshepsut’s accomplishments during his own reign. His reign is marked with attempts to break the royal lineage as well.[citation needed]

For many years, Egyptologists assumed that it was a damnatio memoriae, the deliberate erasure of a person’s name, image, and memory, which would cause them to die a second, terrible and permanent death in the afterlife.[citation needed]This appeared to make sense when thinking that Thutmose might have been an unwilling co-regent for years. This assessment of the situation probably is too simplistic, however. It is highly unlikely that the determined and focused Thutmose—not only Egypt’s most successful general, but an acclaimed athlete, author, historian, botanist, and architect—would have brooded for two decades before attempting to avenge himself on his stepmother.

…. A more recent hypothesis about Hatshepsut suggests that Thutmose III’s erasures and defacement of Hatshepsut’s monuments were a cold but rational attempt on Thutmose’s part to extinguish the memory of an "unconventional female king whose reign might possibly be interpreted by future generations as a grave offence against Ma’at, and whose unorthodox coregency" could "cast serious doubt upon the legitimacy of his own right to rule. Hatshepsut’s crime need not be anything more than the fact that she was a woman."[42] Thutmose III may have considered the possibility that the example of a successful female king in Egyptian history could set a dangerous precedent since it demonstrated that a woman was as capable at governing Egypt as a traditional male king. This event could, theoretically, persuade "future generations of potentially strong female kings" to not "remain content with their traditional lot as wife, sister and eventual mother of a king" instead and assume the crown.[43] While Queen Sobekneferu of Egypt’s Middle Kingdom had enjoyed a short c.4 year reign, she ruled "at the very end of a fading [12th dynasty] Dynasty, and from the very start of her reign the odds had been stacked against her. She was therefore acceptable to conservative Egyptians as a patriotic ‘Warrior Queen’ who had failed" to rejuvenate Egypt’s fortunes–a result which underlined the traditional Egyptian view that a woman was incapable of holding the throne in her own right.[44]Hence, few Egyptians would desire to repeat the experiment of a female monarch.

In contrast, Hatshepsut’s glorious reign was a completely different case: she demonstrated that women were as equally capable as men in ruling the two lands since she successfully presided over a prosperous Egypt for more than two decades.[45] If Thutmose III’s intent here was to forestall the possibility of a woman assuming the throne, it failed. Two female kings are known to have assumed the throne after Thutmose’s reign during the New Kingdom: Neferneferuaten and Twosret. Unlike Hatshepsut, however, both rulers enjoyed brief and short-lived reign of only 2 and 1 years respectively.

Read the rest of the story here. Fascinating.

We then headed to the Temple of Luxor.

Known in the Egyptian language as ipet resyt, or "the southern harem", the temple was dedicated to the Theban Triad of Amun, Mut, and Chons and was built during the New Kingdom, the focus of the annual Opet Festival, in which a cult statue of Amun was paraded down the Nile from nearby Karnak Temple (ipet-isut) to stay there for a while, with his consort Mut, in a celebration of fertility – whence its name.

The guide pointed out why there is only one obelisk:

The temple properly begins with the 24 metre (79 ft) high First Pylon, built by Ramesses II. The pylon was decorated with scenes of Ramesses’s military triumphs (particularly the Battle of Kadesh); later pharaohs, particularly those of the Nubian 25th dynasty, also recorded their victories there. This main entrance to the temple complex was originally flanked by six colossal statues of Ramesses – four seated, and two standing – but only two (both seated) have survived. Modern visitors can also see a 25 metre (82 ft) tall pink graniteobelisk: it is one of a matching pair. The other was taken to Paris in 1835 where it now stands in the centre of the Place de la Concorde.

It is interested to see Muslim and Christian history scattered among the early ruins. In many historic stories, it was clear that later conquerors disapproved of the Egyptian religious symbols. In this temple there is a mosque built right on top of the temple.

This is a fascinating statue of the boy Pharaoh Tutankhamen. What makes it unique is that in all other places, the Pharaoh is depicted as a giant statue with his wife or wives depicted as minor statues at his feet. Here they sit side by side – very different. 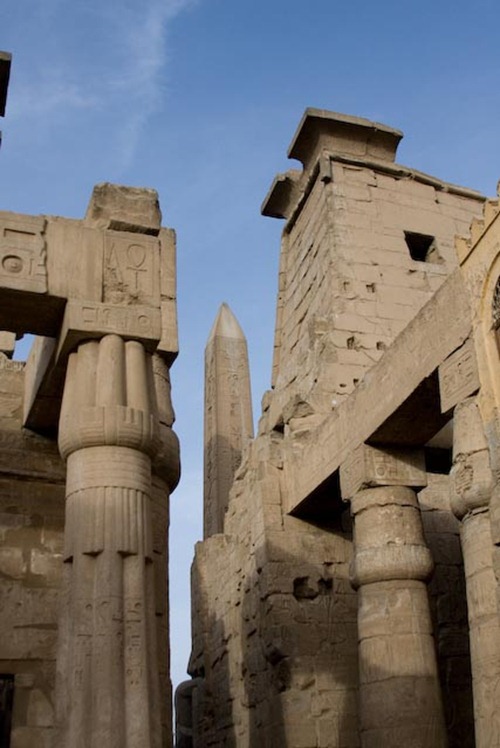 The below paintings are from Roman times. The plaque below describes how they came to be.

And so ended our tour of ancient Egypt. One last entry remains, finishing on the Red Sea. All I have to say is I will go back and if you can, go to Egypt. It is beyond words.