Outside of Agra is Fatehpur Sikri, a small city that would often serve as the summer capital:

The city was founded in 1569 by the Mughal emperor Akbar, and served as the capital of the Mughal Empire from 1571 to 1585.[1] After his military victories over Chittor and Ranthambore, Akbar decided to shift his capital from Agra to a new location 23 miles (37 km) W.S.W on the Sikri ridge, to honor the Sufi saint Salim Chishti. Here he commenced the construction of a planned walled city which took the next fifteen years in planning and construction of a series of royal palaces, harem, courts, a mosque, private quarters and other utility buildings.[2] He named the city, Fatehabad, with Fateh, a word of Arabic origin in Persian, meaning "victorious." it was later called Fatehpur Sikri.[3] It is at Fatehpur Sikri that the legends of Akbar and his famed courtiers, the nine jewels or Navaratnas, were born.[citation needed] Fatehpur Sikri is one of the best preserved collections of Mughal architecture in India.[4]

Ornately built with incredible detail everywhere. It is an architectural wonder, and quite the “summer home”. 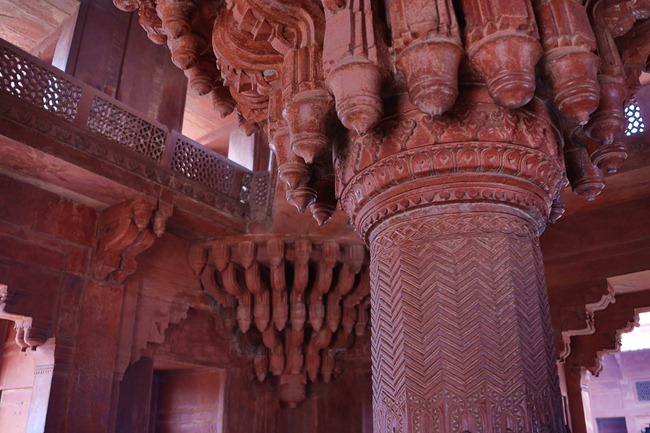 While we were there it was quite cloudy and foggy. We are just fortunate that the entire trip was not that way.

The most interesting part of the fort was the insight into the male/female lifestyle. At different spots through the fort Anu (our guide) would point out where they celebrated – with dancers and musicians – always pointing to where the women would be located/segregated, often behind some type of screen or up on one of the balconies.

Interesting insight into a Moghul’s summer life. As an aside – a point on literacy embedded in the Wikipedia entry:

We had many conversations with our guide on literacy, education and the class system in India. It became apparent that there is a lot of local skepticism around the claimed national literacy average of 72%.