Well, we are finally settling into our new home. That means I can start processing the photos from a few of our last trips, Italy and Normandy in particular. One of the advantages of England is that it is so close to everything. Heathrow is a great jump off to Europe with low air fares (although I doubt that our travel agent every got us a low fare) and the Eurotunnel which is a hop, skip and a jump into France.

One of my personal ‘must do’s’ before we left England was Normandy. As an avid war history buff, there was no way that the opportunity could be missed – and of course, we both knew that the boys would love it. So, on a May long weekend we hit the road. To prepare for the trip, I cracked out an old documentary that I use to love as a young boy – The World at War. We watched the D-Day episode and it set the tone for the trip, giving the family a grounding in what we were about to see. The most significant (and widely watched) piece of footage was shot on Juno beach by Sergeant Bill Grant. The film shows Canadian troops of the Queen’s Own Rifles, 3rd Canadian Infantry Division, landing in the second wave at Bernieres-sur-Mer, Juno Beach, on D-Day.

"It’s the film sequence that epitomizes June 6; that indelible sequence showing darkened but clearly visible figures of the Queen’s Own Rifles of Canada silently exchanging last moment instructions, moving ladders and rifles into final ready position and patting the forward-most troops on their backs for encouragement. The doors swing open and the brighter outside light streams in. The first troops leap out of the landing craft. Ahead of them, clearly captured in Grant’s sequence, are the famous beach-resort houses that the Germans had incorporated into their coastal-defence system. It is point-of-view film of the greatest amphibious invasion in history — the D-Day landings." (from an article by Ted Barris, Friday, June 4, 2004 – The Globe and Mail).

The war footage was rushed to England where it was showed around the world to show the landing in Europe.

As a family, when it comes to trips, we are not the ‘early starter types’. We have a philosophy (which at times I have resisted), if you jam in too much, make the days too long, you lose the moment – and it becomes seeing sights for the sake of seeing sights, instead of truly enjoying it. So we scheduled a Flexipass time for 10AM and headed to France. Our final destination for the day was to be Hotel Barriere in Deauville Normandy. While making the 6 hour drive, we planned to stop at Dieppe to see the sites. 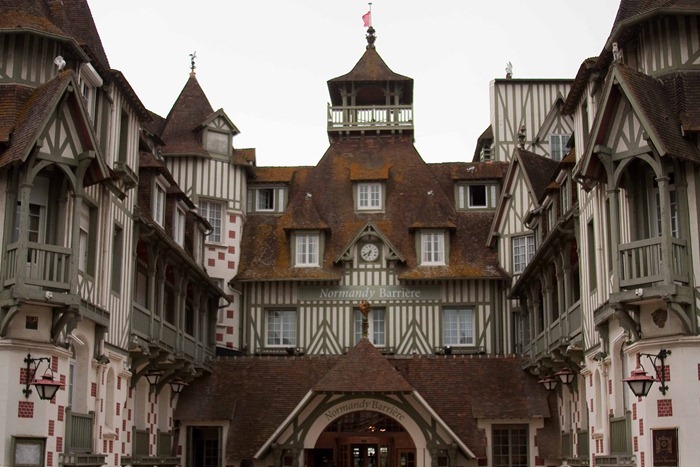 The French countryside was beautiful, farms in full swing and mustard fields in full bloom – yellow as far as you could see. As you drive toward Dieppe, the first thing that struck me were the markers. Everywhere you went, you saw memorials to fallen soldiers (many from WWI). It is not unlike England, and Canada, where there are memorials. The difference is the location. There are markers in the towns, but there are also markers randomly scattered along the roads. A reminder that this is where the two great wars were fought, hand to hand. 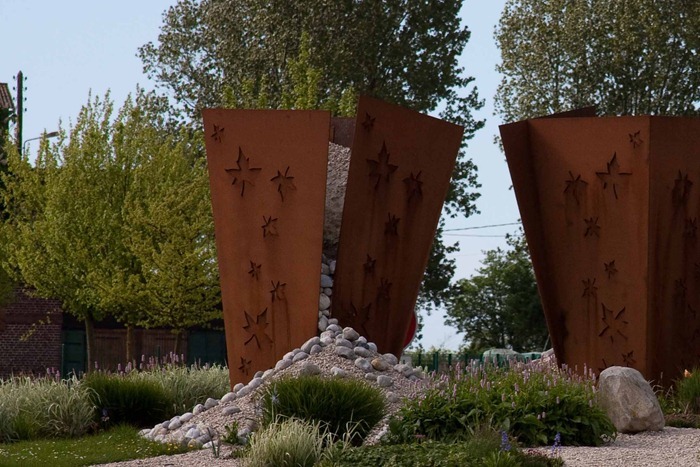 The second thing I noticed as we drove into Dieppe were the Canadian flags. I have read about Dieppe, and there is much debate on the debacle:

The Battle of Dieppe was a test for the full-scale invasion of western Europe. The plan was to make a frontal assault on the town of Dieppe, across the English Channel on the coast of France. The raid on Dieppe would give the Allies a chance to test techniques and equipment for landing troops from the sea. The Battle of Dieppe was a disaster for the Canadians. Nearly 1000 Canadians died and nearly 2000 were taken prisoner.

In the book Juno: Canadians at D-Day, there are two views. One view states that it was a tragic waste of Canadian life while many others say that it was key to D-Days success. Dieppe taught many lessons to the Allies, some very mundane, but in the end it helped teach the Allies about how to invade. A terrible cost, but one that paid off in many lives saved.

The third thing that I/we realized is that it was a national holiday in France and that the sights that we were going to see (The museum) were in fact closed. Which was fine, as we climbed the hills overlooking the beaches and had our first experience with German bunkers. They are scattered along the cliff, huge concrete behemoths, hidden slits poking out of the ground, some are left as only chunks of broken rebar. Amazing to climb into them and look out on the beach, although you need to be careful – the local kids obviously enjoy hosting beer drinking parties in them.

My fourth realization? That I forgot to put a CF card in my camera. So, no pictures of Dieppe. Well, that isn’t quite true. I had many pictures of Dieppe. The problem is that after I looked at them in the viewer on the camera’s built in memory, they disappeared into the cosmos …..

After a light lunch, we headed down the coast toward our hotel. Driving through the French countryside is a wonderful thing. I constantly found myself staring out the window, enjoying the huge range of architecture, thatch roofs with tulips growing out the top, Wisteria in full bloom. And of course, churches. Beautiful old churches, everywhere.

We arrived at the hotel late and faced our first challenge, the car park was full (groan). A common occurrence in England and Europe. When they were building in the 1800’s, no one really took the time to think ahead to when stables would be displaced by motorcars (smile). At least the French are a bit more commonsensical than the British, they all park in the same direction. It only took 20 minutes of driving around and around to find a spot.

We decided to head down to the hotel restaurant (which is highly rated) and enjoy a quick dinner as we were all tuckered. It was there that I enjoyed what had to be my 400th ‘buyer beware’ experience. I have become quite fond of Gin and Tonic while in England (I am told that drinking ‘G&T is ‘very British’ … so be it). So I ordered up. The waiter brought me a Bombay Sapphire, in the glass with ice, Tonic not poured. It looked like a lot of Gin, the glass was half full. It was. I had to keep adding tonic to distil it down. When I got the bill, I figured out why – €18. For my Canadian friends, that is about $25. My one and only G&T in that hotel (LOL).

Outrageous G&T aside, the hotel was amazing. Any hotel that lets animals in the restaurant and in the room is alright by me. We could learn from the French in that regard – that is for sure. 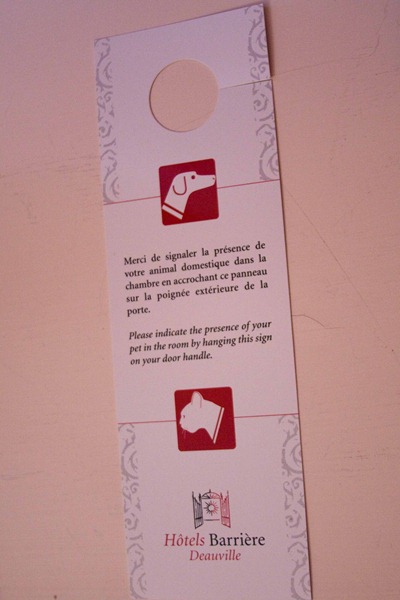 So ended Day 1. Day 2, off to the beaches. And of course, the weather looked ‘very D-Day’ like, clouds ahead.