After all of my posts on India, I am left with a sense of awe. We went not knowing what to expect, a little worried and questioning if it was the right trip for us.

India is a full-on, visual assault. People, activity, honking, smells, traffic, chaos, laughter, despair – all these words describe it. But in the end, I think I would trend toward words like ‘vibrant’ and ‘colorful’ as the ones that truly capture India. 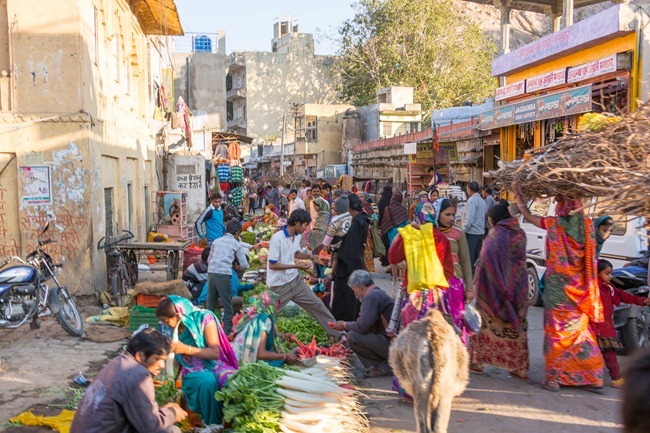 Yes, I think the right word is “colorful”.

It is not for everyone. It is definitely not for the first time or unseasoned traveler.

Personally, I cannot wait to go back.

With Jaipur complete we faced the arduous trip from Jaipur to Delhi. How long would it take? The answer was 5 – 8 hours. Who knows? That is the joy of traveling in India. A couple hundred kilometers is a trip into chaos where anything can happen.

The good thing about that? Lots to see. A few shots from the drive.

Those are bags filled with cotton candy. Some children will be happy, 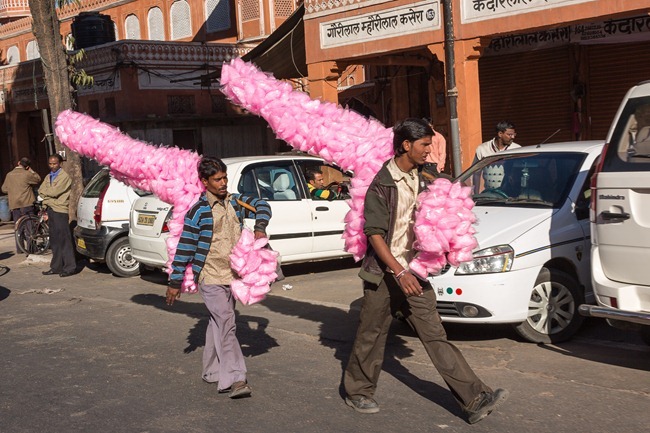 While we were in India I read all about multinational business failure in India’s food market. It seems like the country is not ready for wide-scale, super market led food distribution. Read the article on the Journey of an Indian Onion from the Economist, fascinating. 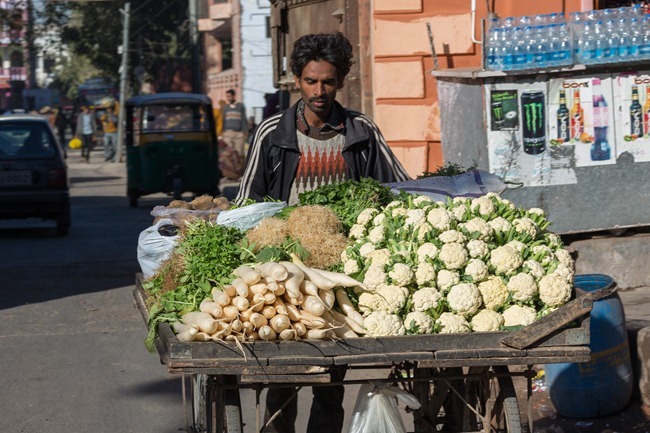 One of the many, many markets that we passed as we drove to Delhi. 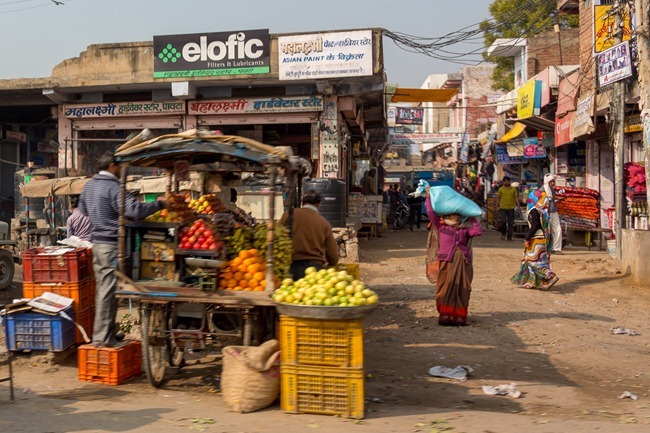 One of the local distribution engines in action. If you tried loading your truck up like this in Canada, you wouldn’t make it 2km before the police had you stopped. 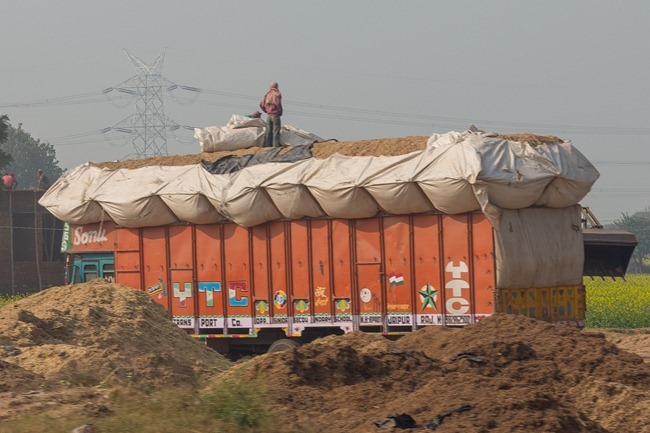 Of course, the police would have to find you and get to you first. It might be hard to conduct a police chase on an Indian highway .. with all of the tractors, cattle, camels and everything else in between.

These guys didn’t seem to mind the traffic. 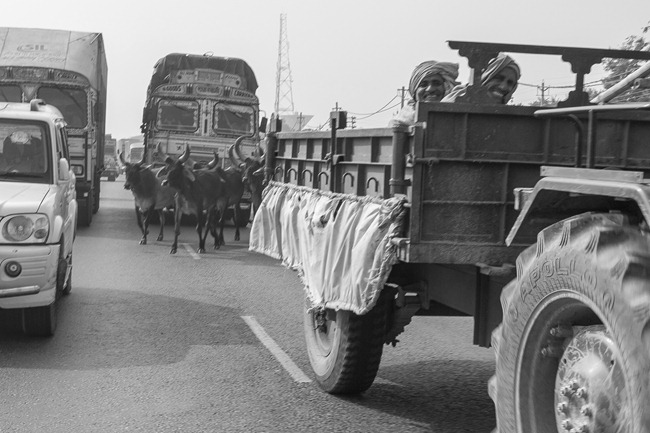 One last shot of a potter, by the side of the road; who needs some help organizing. 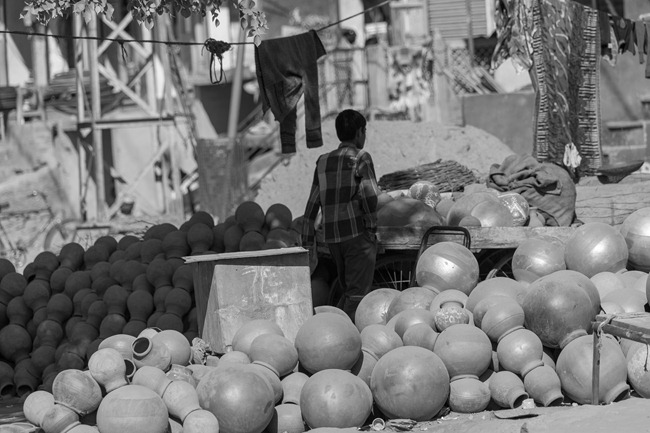 It took us 7 hours. Time seemed to fly by.

Our trip to India involved 3 cities (Delhi, Agra, Jaipur) with driving in between. What would be considered a fast and simple drive in Europe or Canada was arduous in India. The country is filled with half completed roads, which (I was told) stands as a testament to the bureaucracy and corruption that plagues the country.

For a tourist that means long – bumpy drives. Each city would be 5-7 hours apart. We booked a van.

The benefit of that distance is that you can open the window and watch the people go by. As we drove I truly enjoyed watching the trucks.

In Canada, truck drivers pride themselves on how shiny their truck is. In India, it is all about the colors and the bling. 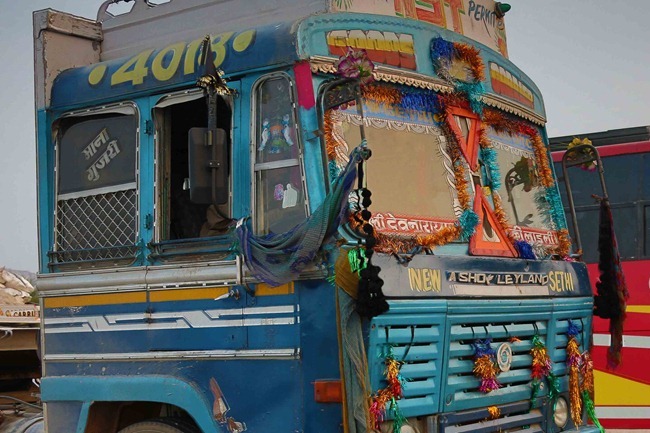 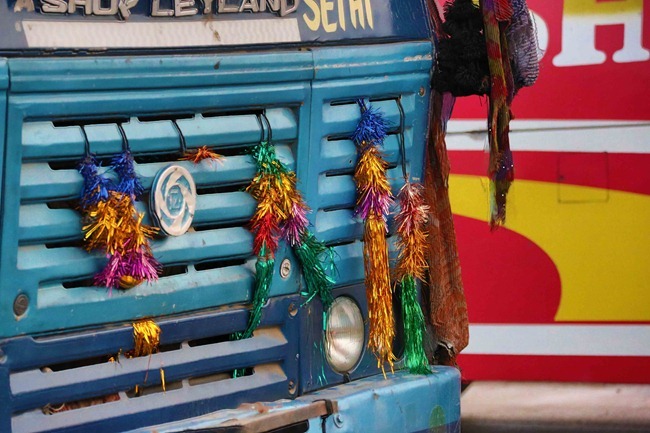 Another big cultural difference. In Canada blowing the horn is an act of anger – done infrequently.

In India, everyone does it, all the time. I mean, all .. of .. the .. time. It is one of the things that makes traveling in India such a full on, sensory overload. On almost every truck, they actively encourage it. 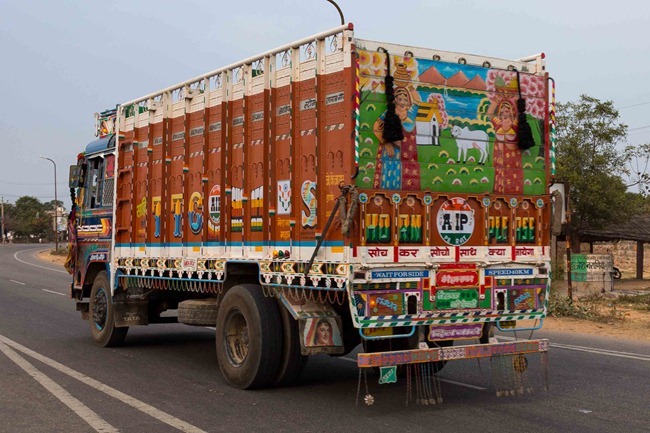 I also learned that inflammable is not the opposite of flammable. English can also be a mysterious language. I particularly enjoyed the “specialist advice” to stay upwind. 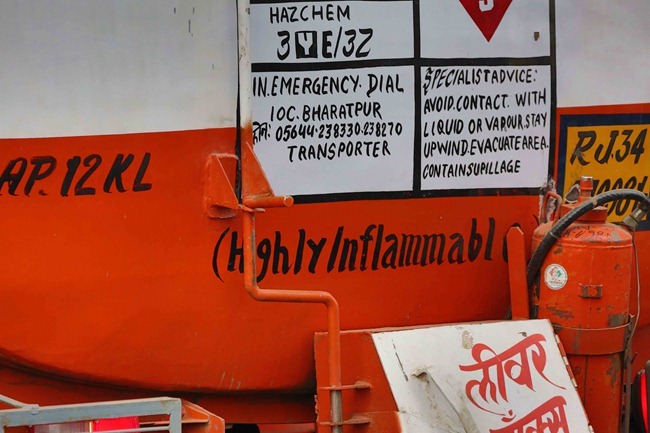 Throughout India you see these on doors, walls and hanging in the air – to ward off evil spirits. In this case they are warding the spirits and locking them out. 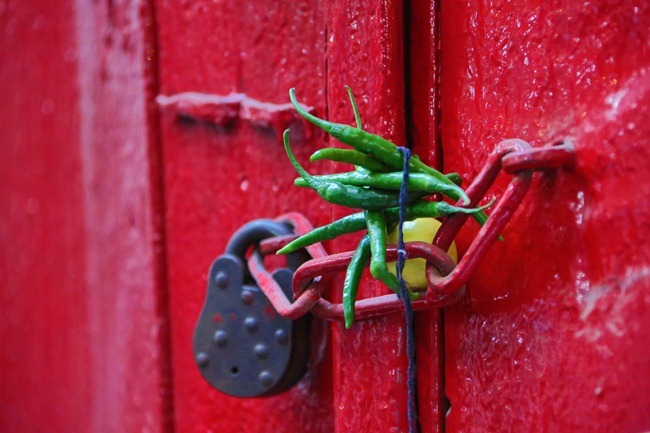 Remember, always look up. They were hanging all around the markets.

I think it is a lime – with chilies.

If there is one photo that I took while in India which “describes” Delhi, this would be my choice.

Modern capabilities (electricity, communications, internet and everything else in between) strewn across the street in chaos. The word I would use is “chaotic”.

How these two guys make heads or tails of the wiring is beyond me? 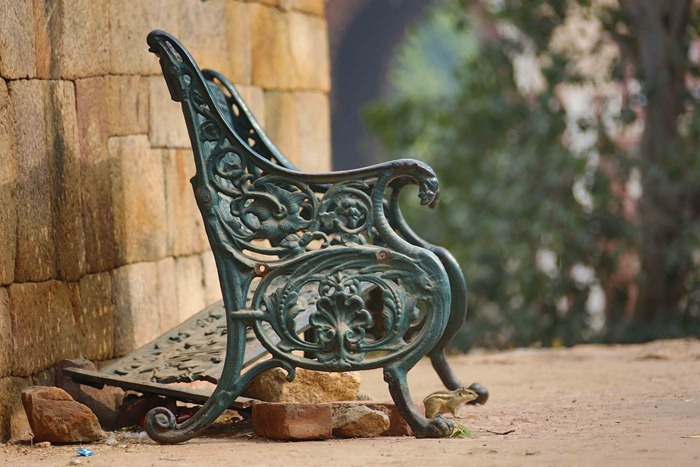 I wonder how long this engine has been abandoned, or what it is from? 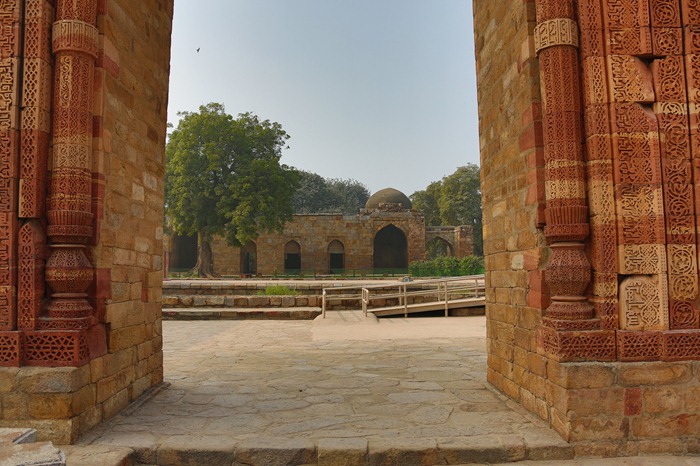 Sorry pal, no peanuts with me. 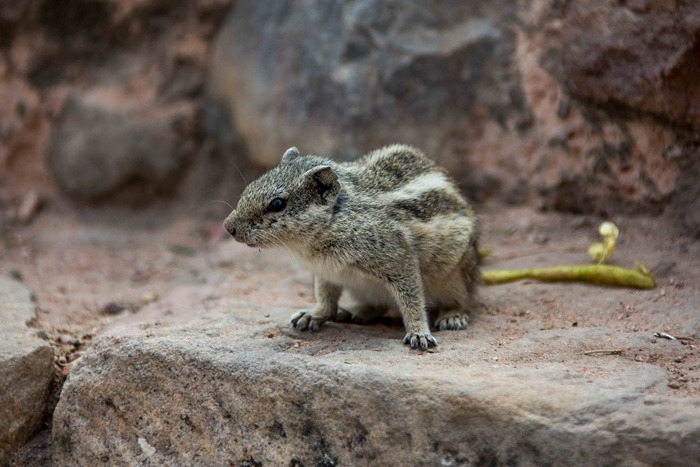 The scaffolding methodology that you will see all over Asia.

Last shot of the Minar.

Our first tomb in India, the model for many of the tombs we would see later.

Humayun’s tomb (Urdu: ہمایوں کا مقبرہ‎ Humayun ka Maqbara) is the tomb of the Mughal EmperorHumayun in Delhi, India. The tomb was commissioned by Humayun’s first wife Bega Begum (Haji Begum)[1][2][3][4][5][6] in 1569-70, and designed by Mirak Mirza Ghiyas, a Persian architect chosen by Bega Begum.[7][8] It was the first garden-tomb on the Indian subcontinent,[9] and is located in Nizamuddin East,Delhi, India, close to the Dina-panah citadel also known as Purana Qila (Old Fort), that Humayun founded in 1533. It was also the first structure to use red sandstone at such a scale

The scale of these places is amazing but in a country like India one has to wonder, what could have happened for the people had they not built this monument to one man so many years ago? How many hospitals or schools could have been built? 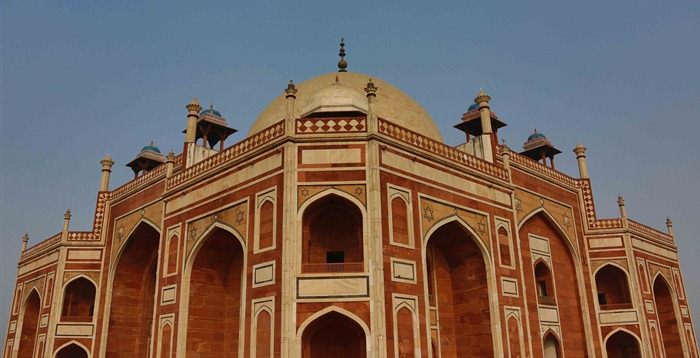 The main buildings are pristine, only the doors show the age of the place. 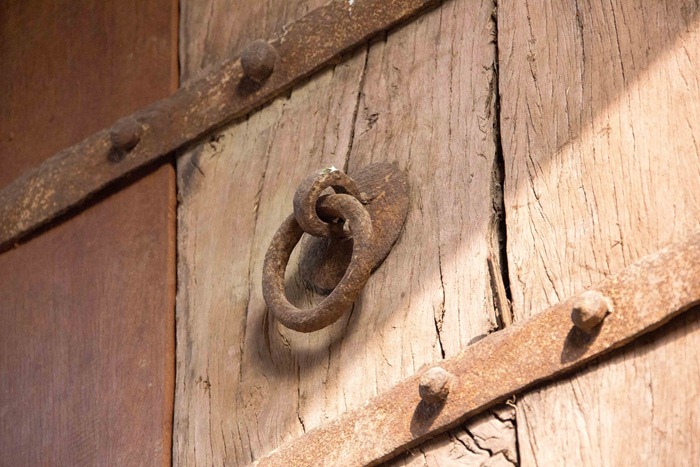 The lotus is very prominent in all of the tombs.

In Hinduism, the lotus (Sanskrit: padma) primarily represents beauty and non-attachment. The lotus is rooted in the mud but floats on the water without becoming wet or muddy. This symbolizes how how one should live in the world in order to gain release from rebirth: without attachment to one’s surroundings. 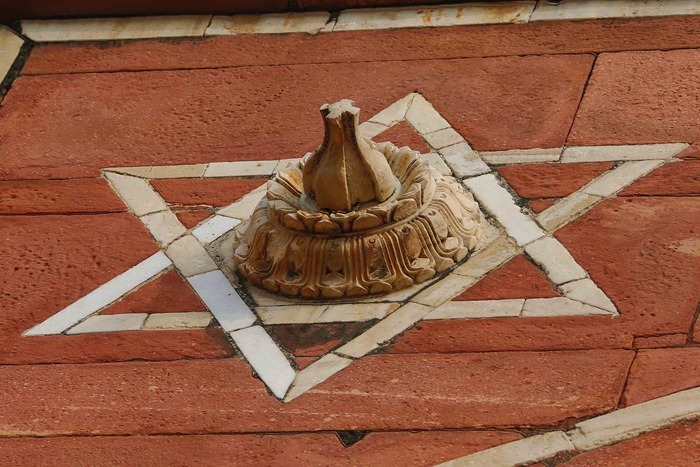 I am not sure how this contraption works but it appears to be some form of irrigation system. Whether it attaches to a gas pump or is powered by a human, I have no idea.

It was the dry season, so the water ways ran dry. 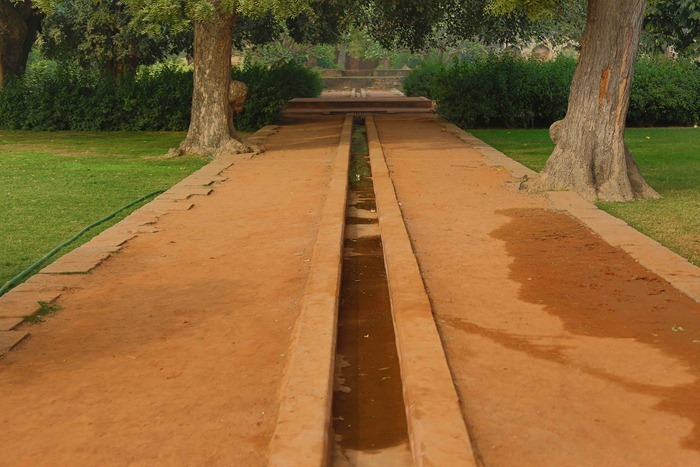 Throughout the grounds the workers were repairing, maintaining, cutting the grass. 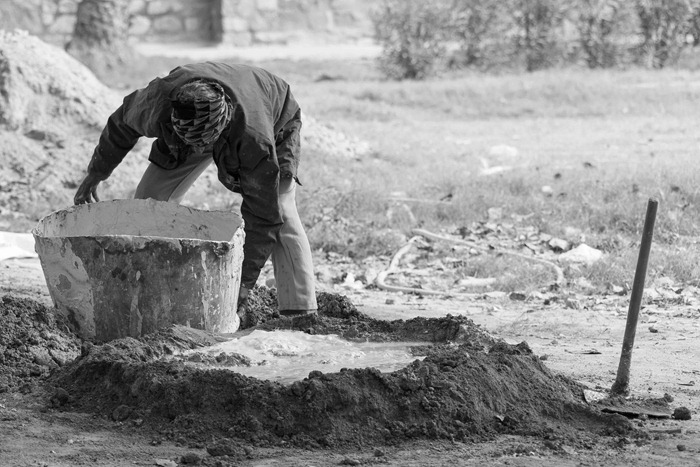 Thanks for dropping by.

That is what this shot cost me. Outside Bangla Sahib temple. These guys have a good gig going 🙂 Love the colors (and so did the other tourists) 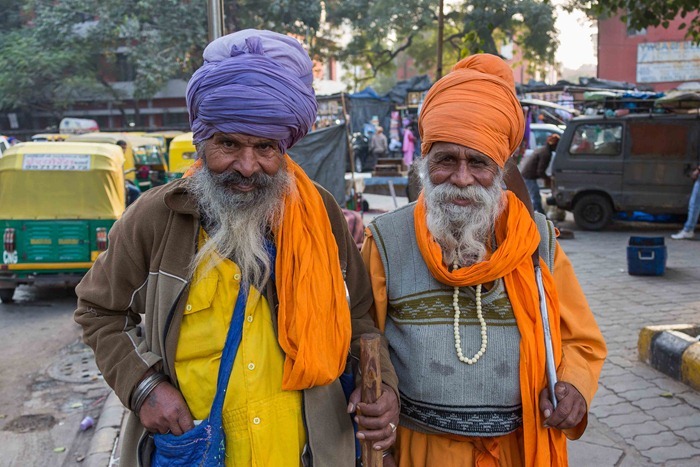 Behind them this man was sharpening knives by pedaling a converted bicycle. Interesting to watch, on the back streets of Old Delhi.

I could have spent weeks shooting the streets of Delhi and never lost interest.

At Humayun’s Tomb. He was busy repairing a side wall. 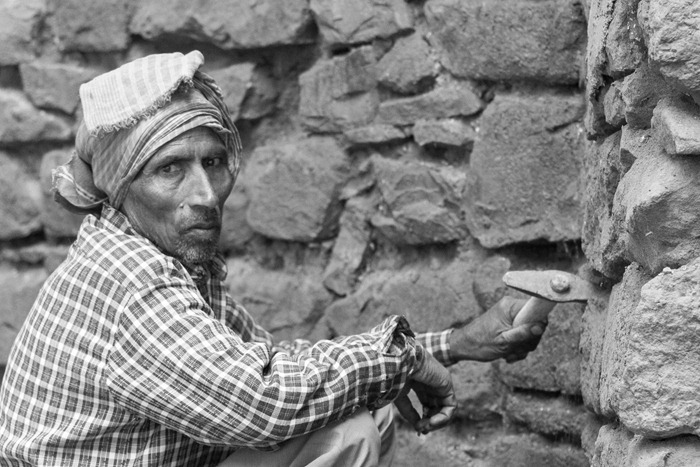 I had never experienced this before; the tradition of an after meal palate cleanse.

At our first (and probably best) lunch during our stay in India they brought out this serving set filled with rock candy, anise seeds and fennel. Mix them in your hand and pop in your mouth.

Surprisingly refreshing and a wonderful tradition.

It must be said, the food in India was spectacular. I miss it very much. The problem is that as tourists we had to be incredibly careful. Their food has microbes and spices that we simply are not use to resulting in the infamous Delhi Belly, which we did not avoid even though our guide did everything he could to ensure we ate at respectable restaurants.

We so desperately wanted to try to the street drinks and foods, but refrained.

We reaffirmed the value of a private guide while in India. For us, with our sons, a private guide provides two important benefits – the ability to dialogue with the family, explaining what we are seeing and flexibility.

Flexibility would be key as we constantly changed our itinerary as we travelled. It also meant that we could ask to get off the beaten path. We did not want a tour filled with all of the monster sites, we wanted to get into the side streets – to see the real India.

A great example of this was our first ‘side trip’ to Agrasen Ki Baoli (Or Ugrasen Ki Bali according to the plaque at the entrance), a step well in the city. Hidden down a side street and easily accessible as it was the dry season. It is a marvel to see. 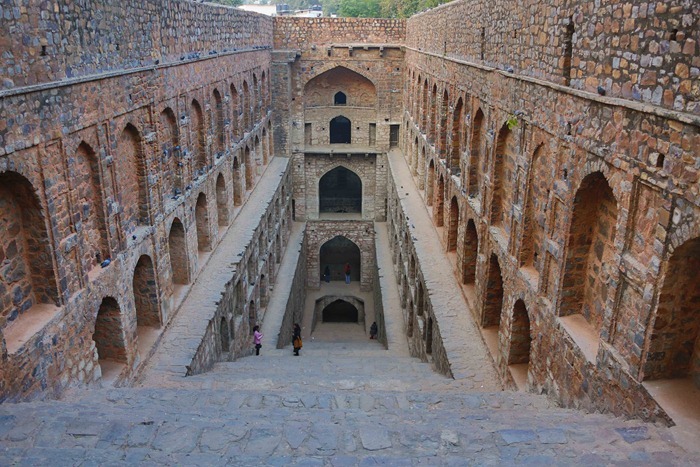 Agrasen ki Baoli (also known as Agar Sain ki Baoli or Ugrasen ki Baoli), designated a protected monument by theArcheological Survey of India (ASI) under the Ancient Monuments and Archeological Sites and Remains Act of 1958, is a 60-meter long and 15-meter wide historical step well on Hailey Road near Connaught Place, a short walk from Jantar Mantar inNew Delhi, India.[1] Although there are no known historical records to prove who built Agrasen ki Baoli, it is believed that it was originally built by the legendary king Agrasen[2] during the Mahabharat epic era[3][4][5] and rebuilt in the 14th century by the Agrawal community which traces its origin to Maharaja Agrasen. 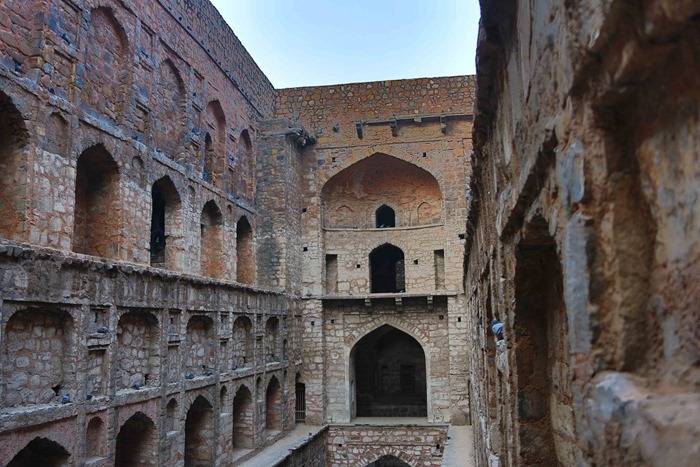 Our guide was unbelievable and if you are in India – I cannot recommend him highly enough. A lifelong learner with great pride in his craft, Anu had 3 degrees and is studying to become a judge, with this work funding his studies. His insight into each place, attentiveness to our family, never ending knowledge and willingness to engage on every aspect of Indian history, politics and culture made it an extra special experience. To say that his the best tour guide we have ever had would be an understatement. I offer up his email to fellow travellers – anuragmisra@rediffmail.com – if you are lucky enough to get him. 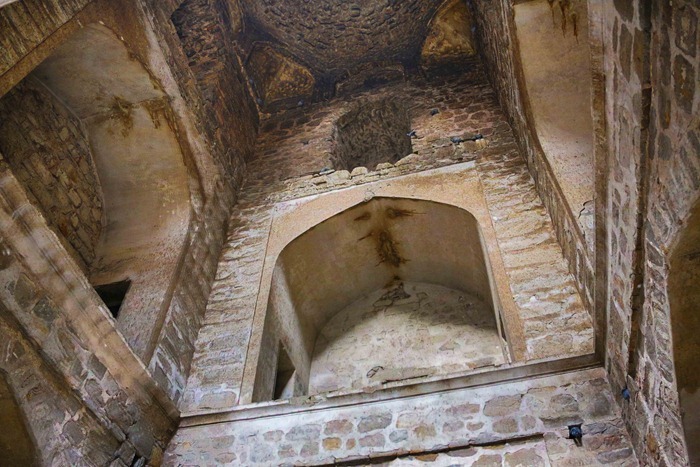 At the bottom you climb through a small hole and can look up a huge cylinder .. dry for now.

Remarkable to see how well their architecture has stood the test of time. 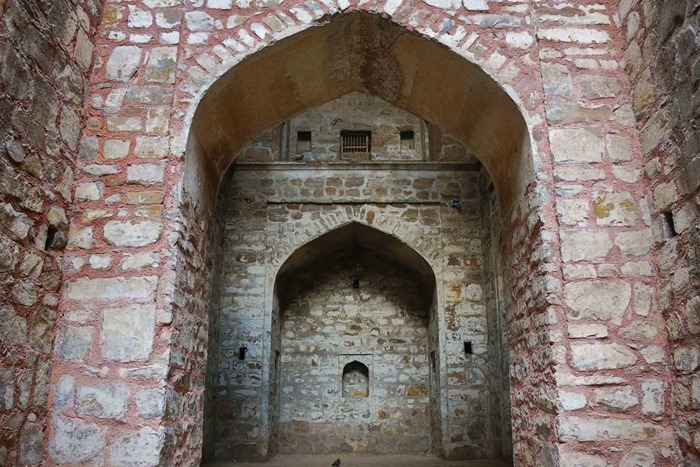 We would see one more step well on our tour. One much larger.

Right up until the day we left for India, there was a lot of debate around going. With all of the negative press (and shocking tourist attack right after we left), we had our reservations. We spoke about cancelling many times. Was it dangerous? Was our time there too long? Would the driving from city to city be too much? I would say that of all of the places that we have travelled, this trip was the one that was most debated. We almost cancelled several times and last minute I completely changed the itinerary – shortening it by a few days.

As our guide said “India is not for the first time traveller. Most of the people who come here have been to many places before they venture to our country”.

Well said and good advice because it is not for the unadventurous or first time traveler. While I am sure there are bus tours which put you in a cocoon, India is what I would describe as “full on”. We spent 9 days there and after the trip we left enlightened, amazed and exhausted.

To be clear, we were also cautious and had a few uncomfortable moments. I happened across this post and could not help but shudder at how this woman is tempting fate (I hope her parents read it and talk some sense into her). Would you walk down a dark alley in Toronto in the middle of the night alone as a woman? Of course not. Same goes for India. We recognized that we stood out in the crowd and with the help of our amazing guide, were smart about it.

It also turned out to be the perfect opportunity to shoot my new lens. The 28-300mm proved it’s value by being able to shoot while in the van or while walking, with huge range. 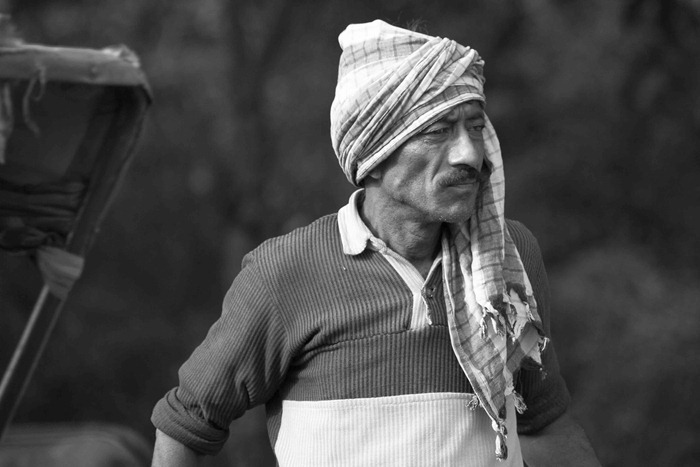 And lets just say, we spent a lot of time in the van as we moved from city to city. India’s lack of infrastructure coupled with a huge population does not make for speedy movement.

Our trip took us from Delhi to Agra to Jaipur and then back to Delhi over 9 days – the Golden Triangle. Over those days we would see many things; beautiful monuments, spectacular architecture, wealth, shocking poverty, back streets, main streets, road side markets and everything in between. 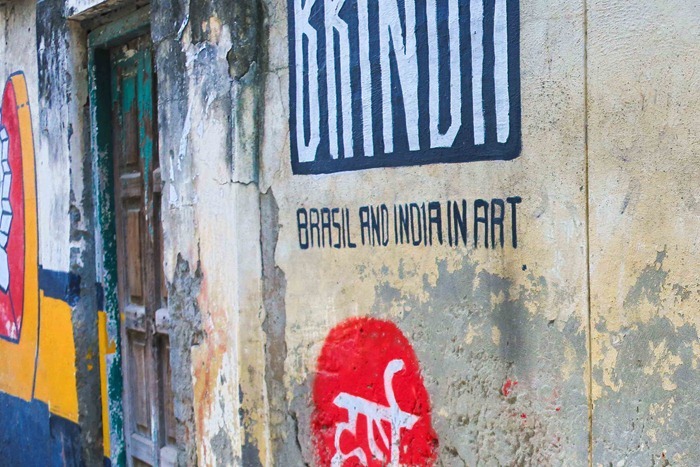 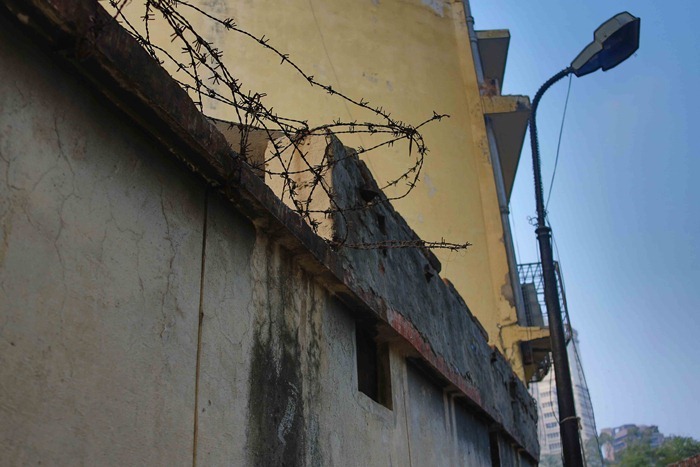 Trip of a lifetime.