We jumped off the plane from Bora Bora, had a nights sleep and then took our parents (Narda’s mom and dad) on a trip to see Hampton Court Palace. History has it that the Archbishop siphoned off a load of church money to build it for himself until Henry VIII took it over. Amazing how church leadership corruption plays such a pivotal part in history. The details here:

Thomas Wolsey, then Archbishop of York and Chief Minister to the King, took over the lease in 1514 and rebuilt the 14th-century manor house over the next seven years (1515–1521) to form the nucleus of the present palace. Wolsey spent lavishly to build the finest palace in England at Hampton Court, which he was later forced to give to Henry as he began to fall from favour.

Tudor sections of Hampton Court, which were later overhauled and rebuilt by Henry VIII, suggest that Wolsey intended it as an ideal Renaissance cardinal’s palace in the style of Italian architects such as il Filarete and Leonardo da Vinci: rectilinear symmetrical planning, grand apartments on a raised piano nobile, classical detailing. Jonathan Foyle has suggested (see link) that it is likely that Wolsey had been inspired by Paolo Cortese’s De Cardinalatu, a manual for cardinals that included advice on palatial architecture, published in 1510. Planning elements of long-lost structures at Hampton Court appear to have been based on Renaissance geometrical programs, an Italian influence more subtle than the famous terracotta busts of Roman emperors by Giovanni da Maiano that survive in the great courtyard (illustration, right above). Hampton Court remains the only one of 50 palaces built by Henry VIII financed from The Reformation.

The palace was appropriated by Wolsey’s master, Henry VIII, in about 1525, although the Cardinal continued to live there until 1529. Henry added the Great Hall — which was the last medieval Great Hall built for the English monarchy — and the Royal Tennis Court, which was built and is still in use for the game of real tennis, not the present-day version of the game. This court is now the oldest Real Tennis Court in the world that is still in use.

A few pictures of the day. Walking in ….

The entrance as you cross the bridge:

A picture in the great room .. note the tapestry. Sorry, a bit dark, no flash allowed.

The horn room where the pages and serving staff would wait. 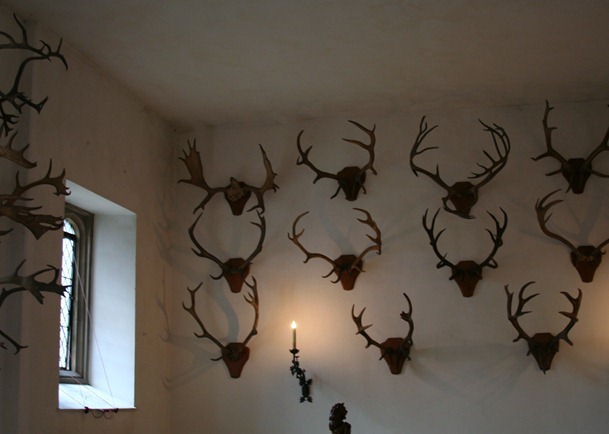 Throughout the palace are sculptures and paintings of Greek gods. In many cases, the nobles of the time (King Henry VIII) are depicted in the paintings as the Greek gods (Mercury, etc.). They had quite the high opinions of themselves. What is a bit ironic is the fact that it was a church Archbishop who had the place built yet there is Greek mythology everywhere …

The gardens encompass more than 60 acres and are inhabited by Canadian geese and deer. Below I am looking upon a HUGE man made lake (which is a long rectangle) 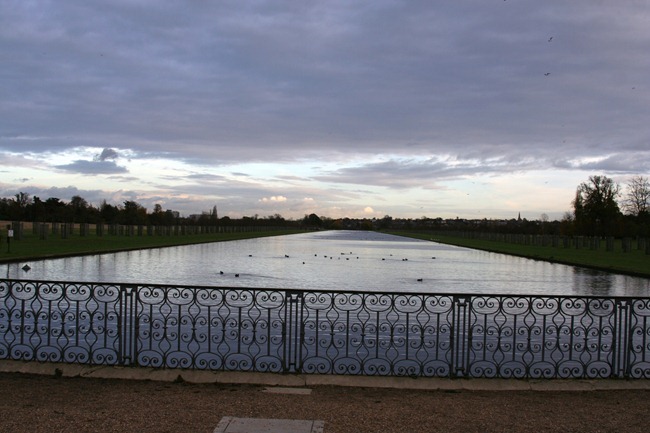 In an attempt to affiliate themselves with the conquering Romans and their triumphant history, Caesar and other Roman leaders are represented in the walls (like the below) and in 9 canvases labeled the Triumphs of Caesar (Painted by Andrea Mantegna in the late 1400s and considered some of the most important works of the Italian Renaissance).

A carving as you leave the palace.