After our tour of Siem Reap, Cambodia we headed to Ho Chi Minh city. I have always wanted to visit Vietnam and this was our first time.

I think this shot best describes the city. A large city with roughly 9M people and according to different sources, 5-6M scooters. I was warned, keep your camera on your neck because thieves on scooters love to whip by tourists and take their cameras.

Crazy. Scooters were everywhere. According to one of our guides, they put heavy taxes on cars (doubling the cost) where the price of a scooter is much more affordable for the people.

The country suffers the same ills as Cambodia – lots of corruption, no real social net to catch people and a low average income. According to this article, the average wage has “risen” to $185 per month. Ironically, it seems like Canada and many European countries are closer to the ideals of Marxism than most communist countries with regard to social balance and fairness. In these counties, it seems like it is survival of the fittest -  far from the ideals of communism.

All of this starts with leadership and unfortunately, many of these country’s leaders only know the survival to grab power mentality. One guide told me that his family was forced to relocate from their multi-generational home to make way for a canal. His family was given $1200 for their home – their neighbor, the police chief, was given $10,000. Interesting observation from the BBC:

But the disparity in wealth between urban and rural Vietnam is wide and some Communist Party leaders worry that too much economic liberalization will weaken their power base.

Despite pursuing economic reform, the ruling Communist Party shows little willingness to give up its monopoly on political power.

In the end, these countries are only held back by one thing: their leaders.

To make the point, look at the Vietnam war museum in Ho Chi Minh. It is a tribute to the terrible and well known war torn history of the country. The contents of the museum were very familiar to me as I have read a lot about the Vietnamese wars. What struck me most about the museum is that it stands in stark contrast to the current political system in Vietnam – the museum is a voice of freedom in a not-so-free country.

How so? Inside the museum is a section dedicated to American photographers who stood against the war and is sponsored by a US organization from Kentucky, USA. It was also published by Random House, USA.

It is the ultimate testimony to the strength of a democracy to see such a public display of criticism not only tolerated but existing as a key part of the political system.

Now compare and contrast the political situation in Vietnam (again from the BBC):

The human rights advocacy group Amnesty International says in a 2011 report that ”more than a dozen activists were convicted in faulty trials simply because they had peacefully voiced criticism of government policies”. A new wave of subversion trials began in 2013.

Do any sites exist to criticize the Vietnam government? Apparently not. Criticize too loudly and you go to jail. I am sure that in this type of political system Jon Stewart would be behind bars.

The War Museum in Ho Chi Minh city stands as an ironic testimony to the greatness of democracy. In the US (or other solid democracy) a leader’s quest for monopolistic power is thwarted by process and the strength of a political system that empowers the people to constantly rebalance the system.

Make no mistake that the photos are a stark reminder of the terrible impact of war on a country that should never have happened. But in the end I left thinking that it also stands as a testimony to true democracy, strength of political process and openness; flaws and all. I say “flaws and all” because no one in the US is tearing this museum down and the political system saw those who supported the war removed, and the US pulled out – but after it happened, not before it happened. 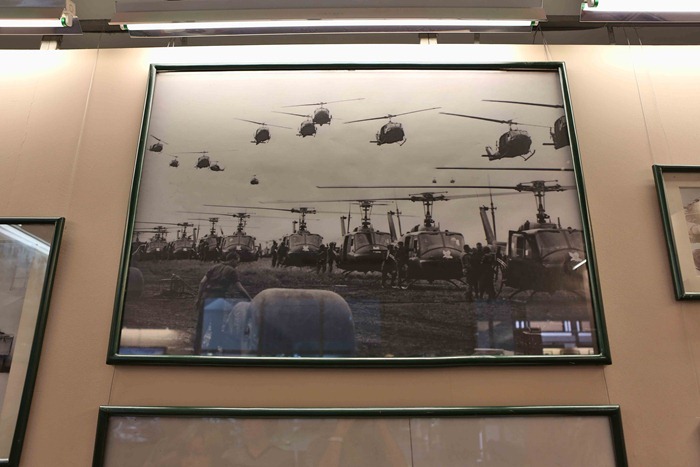 A few final shots of the War Remnants museum.

Love when a place leaves me pondering.

5 thoughts on “VIETNAM: A REFLECTION”