I run from the car to the “potential location” and there it is. Awesome. 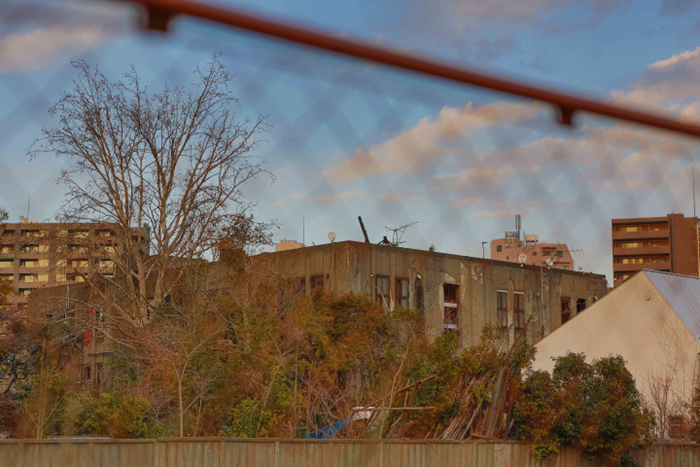 I duck under what must be a “Do not enter” sign on a rope and slip into the lot before anyone sees. It is like the other sites have described, this overgrown building in the middle of Tokyo. Odd .. interesting.

There is a brand new mini-van parked in a portable canvas garage out front. Odd. 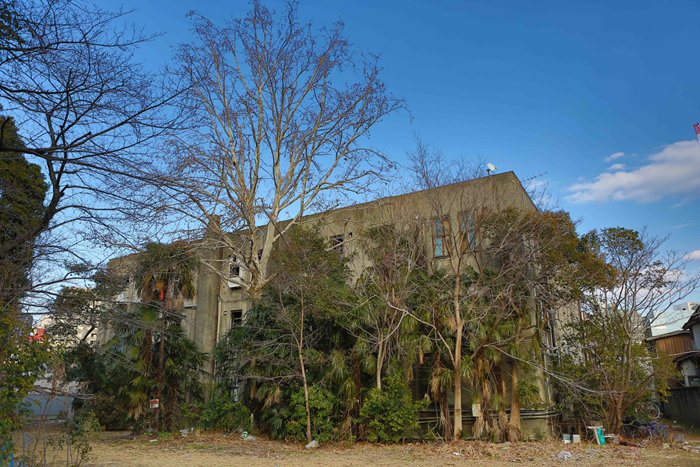 There is debris everywhere. Garbage seems so out of place in uber-clean Tokyo. Why are there so many abandoned bikes?

A history of the dormitory via. (great shots also)

Near the campus of Takushoku University (literally the University of Colonial Expansion) in Tokyo is an abandoned student dormitory built in 1927 by the Japanese colonial government in Taiwan. The university was particularly established to train Taiwanese students to serve the empire and to “develop” Taiwan.

Since the end of war, both Taiwan and China have claimed ownership of the building, citing that it was built using Taiwanese taxpayers’ money. Although the legal status of the building remains unresolved even today, Taiwanese and Chinese students were encouraged by their respective governments to occupy and live in the building, creating essentially an “one building, two systems” situation. The dormitory, also known as Seika Dormitory, has been abandoned since 2007 when a fire killed two of its residents.

A pot balances on a balcony over the entrance. 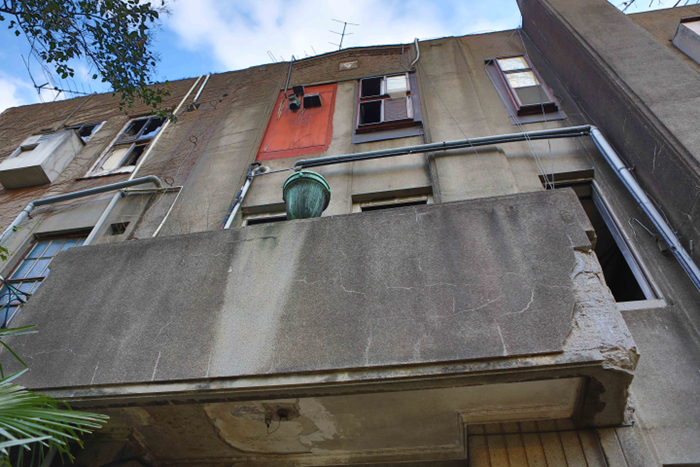 Who in their right mind would leave behind a purple bike? Purple awesomeness.

I stepped inside and was greeted with a “konichiwa” as two fellow explorers made their way around the site. They looked nervous. Don’t worry fellows, I am clearly not the Tokyo police.

There are lots of pictures of the building’s central area, broken roof overhead.

Had to hustle, sun was going down. 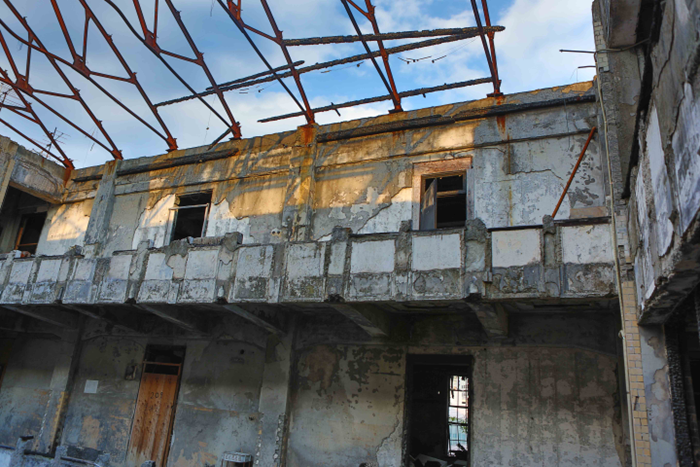 I am surprised there isn’t more graffiti.

Looking up wasn’t that interesting. Looking down was much more interesting. I wonder how many people have stepped on this record? 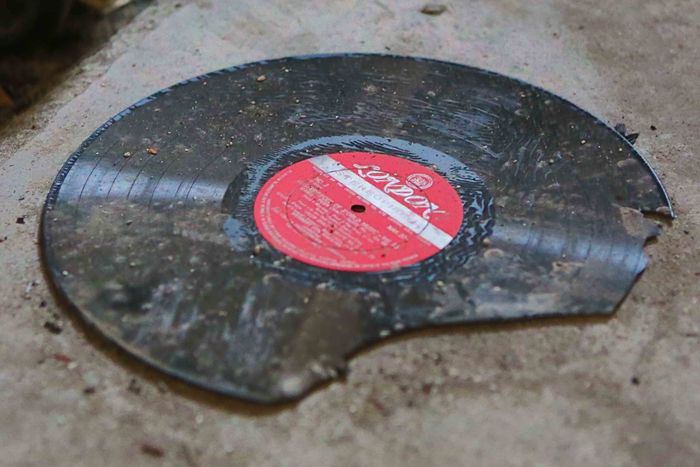 Odd that someone would leave behind a toy gun.

This umbrella had seen better days.

The yellow ball behind the umbrella caught my eye. That is a nice 5 wood.

I decided to start from the top. Up to the roof I went. 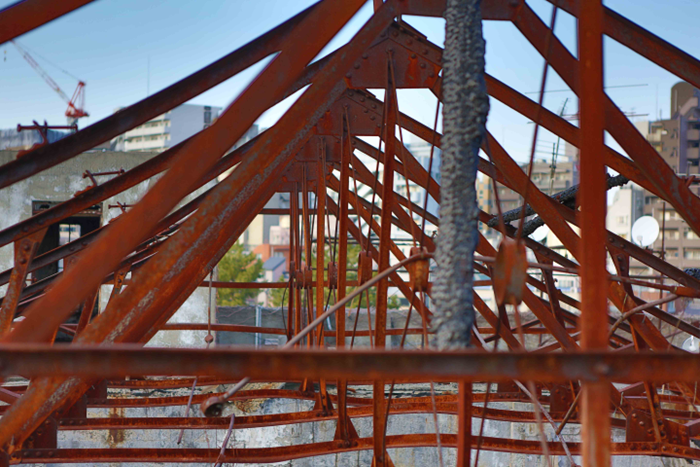 It offers a great view of the floors below. 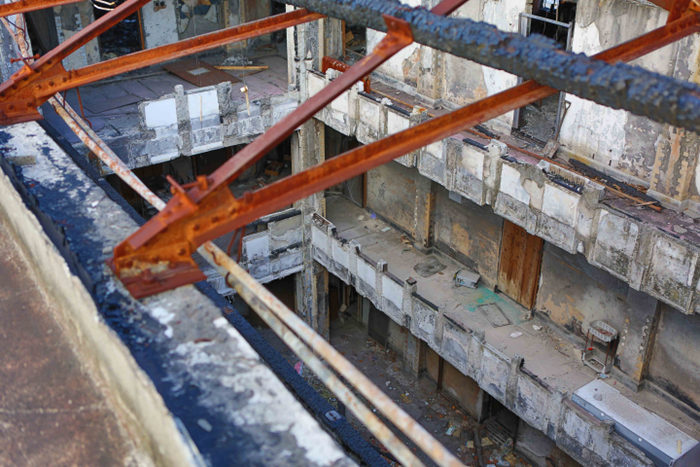 Or the doors below.

Time to go open some doors and peak inside. 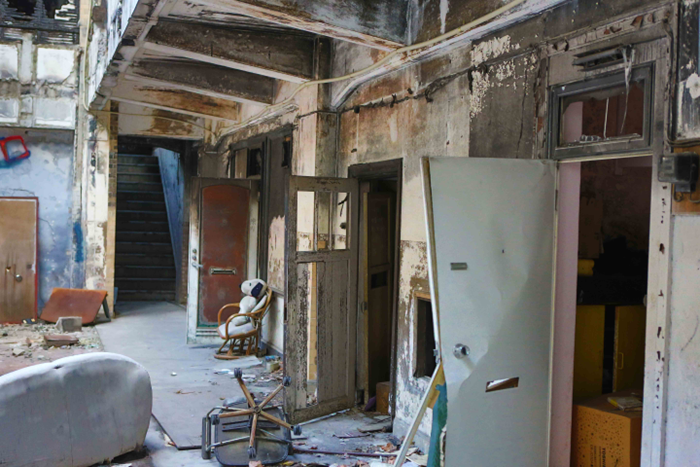