I find it interesting that English is so prevalent in Japan. When speaking with someone on the topic a few weeks ago they suggested that it is due to the post WWII occupation by the United States. That may play a part in it, but I would wager that commerce also plays a big part and the universal nature of English as the language of business (I still remember being shocked to see English signs in Prague).

The other day I was walking down the street and noticed that almost all of the T-shirts were in English. In stores most of the songs are in English. Both of these make sense as commercialization would drives those products.

But it is the odd intermixed English in everyday life that does not make sense to me. The only logical reason I can come up with is because the Japanese language does not have a word for that place/thing. A simple example, sitting outside a surf shop last week having lunch and we noticed this in the window: 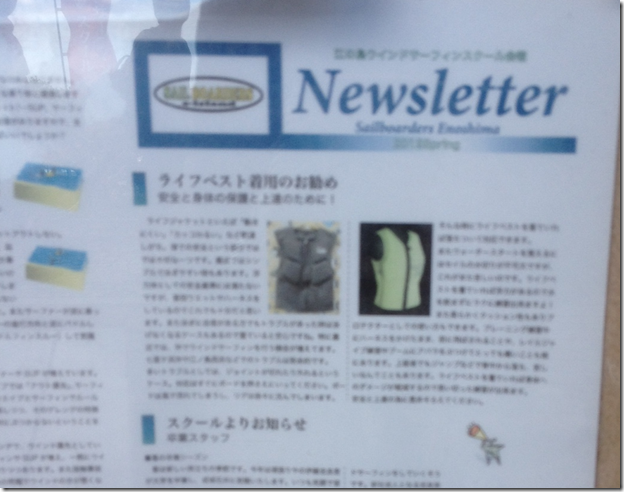 The question in my mind; why would the writer use the word ‘newsletter’ when all of the articles are in Japanese?

There are many other examples. For instance, I was in a very Japanese area of Tokyo and drove by an industrial shop that was filled with used equipment – what look liked machine shop equipment; compressors and such. The sign over the shop said “Used Machines” with no Japanese characters to be seen. I doubt that the use of English was driven by the shop owner’s desire to drive the expat banker clientele.

1 thought on “WHERE ARE THE JAPANESE T-SHIRTS?”